Friday was a very important day for the stock market. And we believe it could signal the end of the 2022 bear market – and the start of a big new bull market.

It looked like history was going to repeat on Friday.

We got super-hot jobs data at 8:30 a.m. Eastern. Stock futures immediately sank. Stocks opened lower and traded down more than 1% early in the day. It was going to be another ugly day on Wall Street.

Fifteen minutes after the open, stocks stopped falling. The markets bottomed and spent the next seven hours rallying. By the end of the day, the Dow Jones was in the green.

It was an intraday reversal for the books.

But why did it happen? And what does it mean for stocks going forward?

This most recent jobs data was red-hot. No question about it. But it is likely the last hot jobs report we see for a while.

The price action tells us that the market believes November’s jobs report was the “final bad data report” before a string of positive data in the next few months. It also means the stock market is ready to rally big in 2023.

All leading indicators of employment are pointing down. The strongest of those indicators – the Conference Board’s Leading Economic Indicators index – peaked in April 2021 and has been collapsing for the past 19 months. It now sits deeply in negative territory.

And every time this index has plunged into negative territory over the past 70 years, it led to labor market destruction. The typical lag? Somewhere between 18 months and 24 months.

The LEI index peaked 19 months ago. That means that 70 years of historical economic data suggests the labor market will start shedding jobs sometime between December 2022 and April 2023. 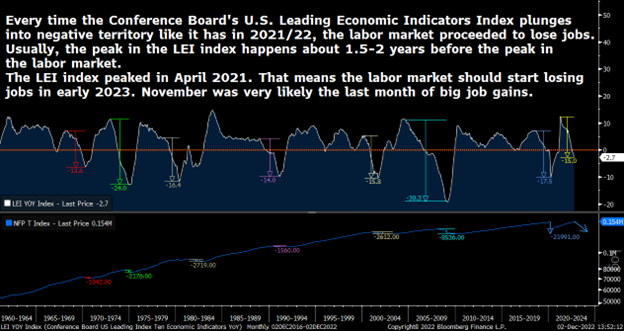 With layoff announcements soaring and economic confidence indicators plunging, the bulk of evidence seems to suggest the labor market will start showing significant weakness either this month or in January 2023.

Oddly enough, that’s very bullish for stocks. Every time the labor market starts to crack, the Fed pivots. And a Fed pivot is the exact medicine the stock market needs to bounce back into a bull market next year.

The Crack in the Fed’s Façade

Here’s the thing about the Fed: It doesn’t care about stock prices, home prices, or billionaire hedge funds’ performance fees. But it does care about the average American’s job. And when Americans start losing jobs, it starts acting differently.

That is, the Fed has played the “tough guy” all year long.  That’s because it’s easy to play the tough guy when the only negative consequences of your rate-hikes are falling financial asset prices. Financial assets were in a bubble anyway. They needed to drop. They’ll rebound. All is fine.

But it’s very hard to play the tough buy when people are losing their jobs.

That’s why the Fed has actually never stayed tough when unemployment rises. Over the past 50 years, every time the labor market started to crack and folks began losing their jobs, the Fed gave up the tough guy act. It started cutting interest rates to stem the job loss. 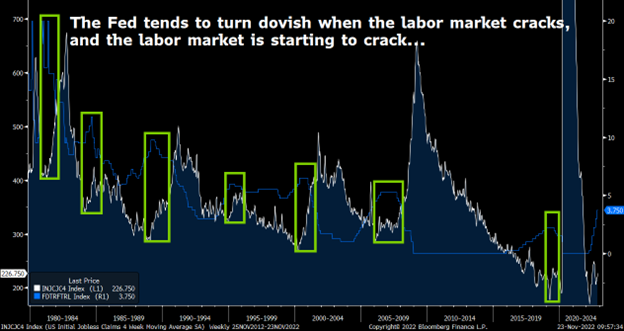 Next year will not be an exception to the trend.

As the labor market starts to crack and Americans start to lose their jobs in early 2023, the highly anticipated and long-overdue “Fed pivot” should finally arrive.

When it does, the labor market and economy will stabilize. And stocks will soar into a new multi-year bull market.

On Friday, we got our clearest sign yet that the selling has stopped.

The stock market was given every single reason to absolutely collapse. It was up massively from its lows, running into both its 200-day moving average and bear market downtrend resistance line. Then it was hit with shockingly and uncomfortably hot jobs data.

That’s a recipe for a stock market crash. But while stocks dropped sharply at the open, investors spent the day buying the dip. By the closing bell, the market was basically flat.

That’s bullish. If that jobs data – delivered on the heels of a massive rally and with the indices trading at super-critical technical levels – didn’t kill the recent stock market rally, what will?

At this point, probably nothing.

We are increasingly confident that this was the last strong jobs report and that over the next few months, inflation rates will collapse, the labor market will start shedding jobs, the Fed will pivot on its monetary policy stance, interest rates and yields will fall, the economic outlook will improve, and stocks will rally.

Clearly, the market is starting to think so, too. Why else did we not collapse on a hot jobs report like we have every other time in 2022?

The worst of the inflation crisis is behind us. Better times are ahead. The bear market is likely over. A new bull market could be getting started right now.

Learn how to potentially make small fortunes next year by playing the new bull market.

How can UK-based businesses accept Bitcoin?

Greenest holiday ever? Here’s how to rent a sustainable Christmas tree

An Unstoppable Stock Market Is About to Meet the Immovable Fed