USD/CAD was making a fresh cycle low on Tuesday as oil continued to recover and print higher and as the US dollar melted. This was so despite sentiment for a faster run down of quantitative easing and a faster pace of interest rate hikes from the Federal Reserve. At the time of writing, USD/CAD is trading at 1.2570 and consolidates above the overnight night low of 1.2567.

Investors were reassured that the Fed will tackle inflation which led to stocks rebounding overnight and reversing the recent downward trend. Fed Chair Jerome Powell reassured explained in a testimony that the Fed is prepared to tighten monetary policy to maintain price stability.

Powell commented, “if we see inflation persisting at higher rates than expected then we will raise interest rates… we will use our tools to get inflation back.”

Analysts at ANZ Bank explained that the chair ”expects supply-side pressures to ease somewhat but said if that doesn’t happen then there is a risk that inflation becomes more entrenched and therefore the Fed would then need to respond. He also said he expects the economic impact of the Omicron variant to be short-lived.”

This is a common theme between banks which is starting to outstrip demand for the greenback. Investors are inclined to move into riskier assets and the onset of inflation is a plus for the commodity sector as well. Commodities tend to perform well in the face of inflation for which the loonie trades as a proxy. Oil, for instance, is heading higher for all the reasons noted here.

National Bank of Canada said in a note today, ”the Bank of Canada’s commodity price index for 26 commodities produced in our country and sold on world markets stands at a new record high early in Q1 2022 when expressed in Canadian dollars. That’s good for the trade balance, profits, job creation, and the Canadian dollar.”

All in all, ”rising commodity prices, a current account surplus, a strong labour market and positive interest rate differentials argue for an appreciation of the Canadian dollar,” analysts at the bank added.

The fundamentals tie in with the following technical outlook:

The price closed below the neckline of the head and shoulders formation. A restest of the old support between here and 1.2650 (61.8% Fibonacci retracement area) would be anticipated to hold and lead to a downside continuation for the days ahead which puts 1.2490 on the map.

Why did the S&P 500 rally on Monday afternoon?

An incredible session on Monday with wild swings and a huge afternoon rally. Stocks opened the session and looked to be carrying on and even accelerating recent losses with most main indices down 4% by the halfway stage of the day. However, some signs of life in risk appetites showed, most notably from Bitcoin as it went positive for the day. This rally then spread across most equities and indices.

We put the majority of the price action yesterday down to two main factors. Firstly, position closing ahead of the Fed meeting, starting today, and a massive earnings week. Many commentators are attributing this move to a buy-the-dip philosophy, and that may have some credence, but the lack of follow through so far in Europe this morning is giving that argument less strength.

We have two major focuses this week to make investors reduce positions and wait. First, the Fed meeting is more interesting than usual given the economic backdrop and market action in 2022. Does the Fed hold the line of its recent hawkish tilt, or have markets unnerved some Fed members? Recent PMI data and consumer sentiment data are weakening. Second, this is the most important week on the earnings calendar. There are 104 companies from the S&P 500 (SPY) (SPX) reporting this week. Notably, Microsoft (MSFT), Apple (AAPL), Tesla (TSLA), General Electric (GE), McDonalds (MCD), Caterpillar and Chevron (CVX). A broad spectrum from tech to oil to consumer. This will give a broad picture then not only of company outlook but the general economic outlook. No wonder then that traders are reducing positions ahead of the data.

Yesterday was the first day since June 2020 that the S&P 500 (SPY) has opened below its 200-day moving average. This led to technical selling, which accelerated as the session wore on. Key support at $428 saw more stops likely generated below, and the price accelerated yet again. However, eventually that led to exhaustion and the price had only one option: to recover.

However, a key sign is the lack of volume behind the afternoon recovery. The majority of volume was triggered on the fall during the first half of the session. The rally was on light volume. This adds to our thesis that the recovery was merely based on exhaustion and not a genuine buy-the-dip recovery. Witness the SPY 15-minute chart below. The point of control was at $428, i.e. price with the highest volume. Above $430 there was a very low level of volume.

The daily chart shows the significance of that $428 level. This is the low from October, the last significant low of the current long-term uptrend. A break lower creates a new low and so a new downtrend. This makes it a huge level to hold. Holding also puts in place a bullish double bottom. $428 then is our pivot. Yes, we did spike lower, but the close is the more significant. Closing below $428 will see more losses and a move to $404 in our view. The longer $428 holds the more power bulls gain and the more likehood of a sustained bounce. That will bring the 200-day at $442 as the next key resistance. 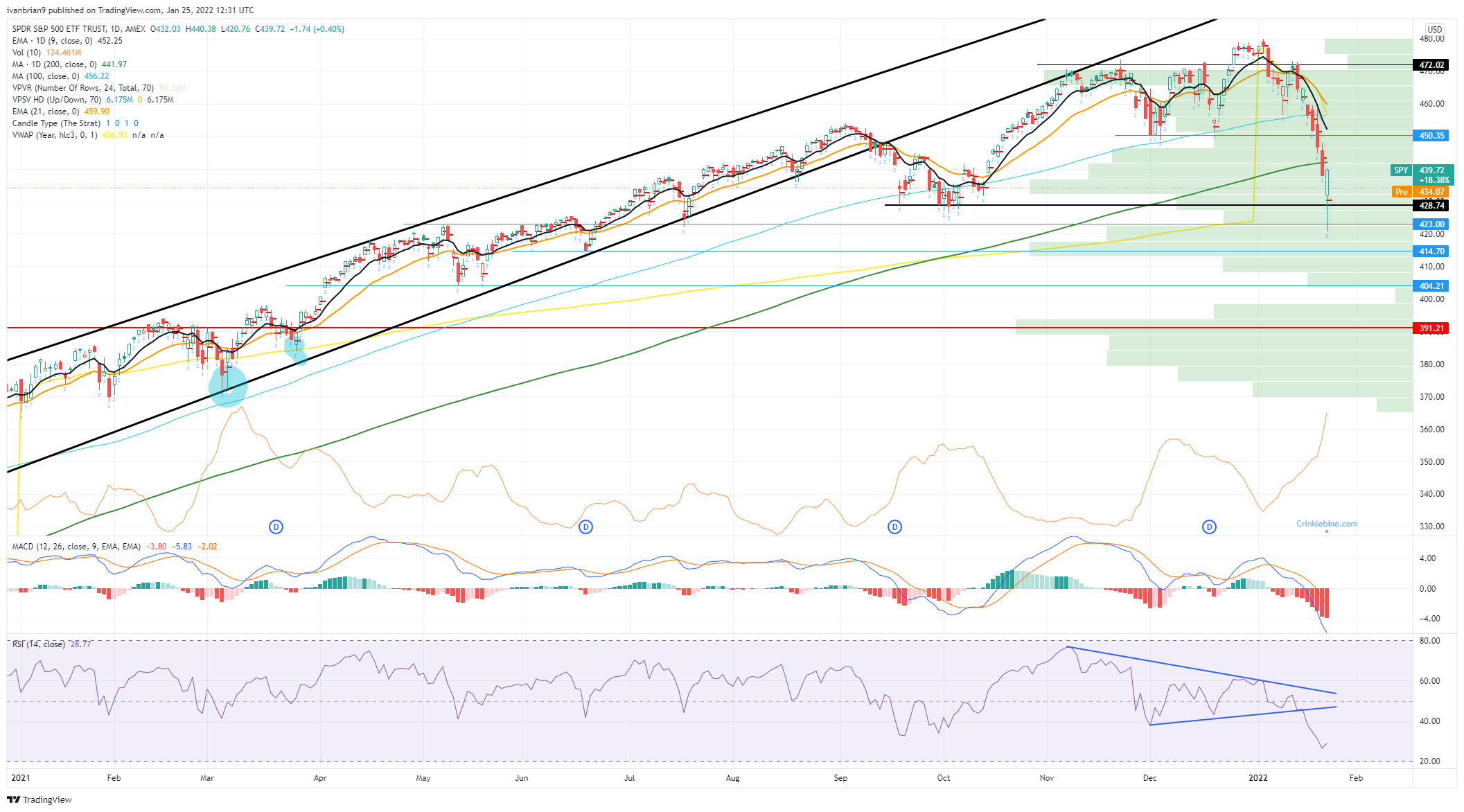 Gold prices held firm overnight despite a US Dollar that was charged on safe-haven flows amid a volatile New York trading session. US stocks managed to close in the green after a late-day rally, marking an impressive intraday turnaround. The broad risk aversion and volatility was the likely driver for bullion prices.

A healthy amount of buying in the Treasury market also helped gold by pushing yields lower across the short-end of the curve, while longer-dated yields trimmed losses as stocks rebounded. Bullion is sensitive to Treasury yields, as the metal is a non-interest-bearing asset. Treasury rates have risen sharply since early December, boosted by increasingly hawkish Federal Reserve rate hike bets.

However, those rate hike bets may have become too aggressive. An overnight auction of $54 billion in 2-year Treasury notes was met with strong demand on Monday in the United States. The auction saw the highest demand seen since early 2020. That suggests the hawkish bets calling for nearly four Fed rate hikes in 2022 may be overdone. This is a good sign for gold as higher demand for bonds raises the price. Bond yields fall when prices rise.

Bullion traders have a busy week ahead, with the Federal Reserve’s policy decision set to cross the wires on Wednesday. Federal Reserve Chair Jerome Powell may push back on some of the aggressive market pricing on rates during the post-FOMC press conference. Markets are currently pricing in nearly 100 basis points of hiking, which is likely more than the Fed is comfortable with currently despite the recent hawkish shift among even more dovish board members.

Later this week, the Fed’s preferred inflation metric, the personal consumption expenditures price index (PCE), is slated to drop. Analysts expect a reading of 4.8% year-on-year in the core segment of the price index for December. That would represent a small increase from November. It would also be prudent to keep an eye on the 5-year note Treasury auction tonight to help gauge overall bond demand. Another strong auction could help drive down rates on the shorter end of the curve. That would likely bode well for gold prices.

Gold prices rose from a newly establish level of support, which served as resistance numerous times going back to July 2021. The next target for bulls is likely the November high at 1877.15. The RSI oscillator is in neutral territory, while MACD strengthens. Prices may require a bit more consolidation before the next big push higher. Alternatively, a move lower would aim for a quick show of support from the former resistance level.

The GBP/USD pair remained depressed through the early part of the European session and was last seen trading near a two-week low, around the 1.3535 region post-UK PMIs.

The pair extended its recent pullback from the vicinity of mid-1.3700s, or a two-month high and witnessed some selling for the third successive day on Monday. This also marked the sixth day of a negative move in the previous seven and was sponsored by a combination of factors.

Growing demands for Prime Minister Boris Johnson’s resignation over a series of lockdown parties in Downing Street continued undermining the British pound. Apart from this, the emergence of some US dollar buying further contributed to the offered tone surrounding the GBP/USD pair.

On the economic data front, the flash version of the UK PMIs fell short of market expectations and showed that expansion in both the manufacturing and the services sectors slowed notably in January. The data did little to impress bulls or lend any support to the GBP/USD pair.

That said, increasing bets for additional rate hikes by the Bank of England held back traders from placing aggressive bearish bets around sterling. On the other hand, a fresh leg down in the US Treasury bond yields capped the USD gains and helped limit losses for the GBP/USD pair.

Investors also seemed reluctant and preferred to wait on the sidelines ahead of the key central bank event risk – the outcome of a two-day FOMC policy meeting on Wednesday. This makes it prudent to wait for a strong follow-through selling before positioning for any further decline.

Moving ahead, market participants now look forward to the release of the flash US PMI prints, due later during the early North American session. This, along with the US bond yields, will influence the USD price dynamics and produce some trading opportunities around the GBP/USD pair.

Fed Preview: How Rate Hikes Could Stimulate Demand for Stablecoins

Why did the S&P 500 rally on Monday afternoon?

What can we expect from Biden's press conference?

Metaverse Real Estate Market is Growing at 31.2% CAGR to

Is the “uncanny valley” good for a future metaverse?

Investment and the multiple risks of 2022

China economy: the fallout from the Evergrande crisis

How it started vs. how it’s going with the Bitcoin Law in 2021