Hey everyone, Kevin here. This week I have something a little different to share with you than the usual numbers and data.

If you wondered how NFT LA was, I have all the juicy details right here. Let’s go!

It got off to a rocky and wild start

At 10:00 AM on March 29th, 2022, several thousands of attendees of NFT LA were waiting in the main conference hall for the conference to begin. It was supposed to start at 9:30, so they were half an hour late, and people were clearly confused.

I struck up a conversation with my seat neighbor, and learned that the first speaker was supposed to be Jeff Zirlin (aka The Jiho), Co-Founder of Axie Infinity, one of the most successful play-to-earn games in the NFT space.

Well literally just hours before that speech, Axie Infinity had just experienced what might be the largest DeFi hack in history: $600 million dollars worth of ETH and $USDC were stolen from the Ronin network.

They had literally just experienced this hack – the Ronin Networked posted on Twitter at 8:30 AM on that day, and here we were just and hour and a half later, waiting for the co-founder to speak. It was kind of a surreal moment, for sure, and I would have understood completely had The Jiho not spoke at all that day. He had much bigger fish to fry than entertaining a bunch of degens at an NFT conference.

The Jiho did speak, and it was obviously very difficult

I’ve got to give him credit here, it was very difficult to walk onto that stage no doubt, and when he announced what had happened, the audience gasped. He was obviously very emotional with what had just happened to him and the company, and $600 million dollars is a staggering amount of money, inconceivable really if it were in stacks of twenties.

He was clearly very far off his normal game, and the rest of his fireside chat with Shelly Palmer was rather unremarkable. I get it, his mind was a million miles away from that conversation, and mine was too, and I was learning more about how the hack had happened, on my phone.

Hollywood is coming to NFTs

Or maybe NFTs are coming to Hollywood, I’m not sure who is bringing whom, and where. But Hollywood was definitely in attendance, with Mark Cuban onstage, later bringing out Charlie Sheen (of Two and a Half Men) and Kevin Connolly (Entourage). They pitched a new television show which is selling memberships as NFTs, hoping to fund some or all of their new show production via NFTs.

The most interesting thing I learned here is that everyone is eager to break “the system”. In traditional finance, that’s the banks, the middlemen, the intermediaries, everything that got us started in cryptocurrency to begin with.

In Hollywood, the systems to break includes the film studio, the showrunners and financiers and the like. Charlie Sheen, love him or hate him, is definitely a funny guy.

Me, with my Stone-Age Technology, I don’t really understand all of this, I’m just happy to be back to the party – Charlie Sheen

Happy to be back at the party

I hear you, Charlie, I’m happy to be back too, but for different reasons. One of the most popular talks was unsurprisingly “How to Execute Amazing NFT Projects,” with speakers from creative and technical service providers to the industry.

Many in the audience left for the next speech, “NFTs and Property Rights”. I guess that makes sense, too, but I found it interesting. Perhaps many people leaving for what some may consider the “boring details” is kind of emblematic of where we are right now as an industry. The quick buck is alluring, but the details are rather messy.

Shout out to the diversity of attendees

While diversity of the NFT space can definitely be greater, and more inclusive, I’ve been attending technology conferences for over 20 years, and anecdotally, this was most diverse group of people at a conference I’ve ever attended.

One panel that stood out to me was the “Dapper Labs Presents: Women in Web 3”, featuring Stephanie Smellie,  Ridhima Khan, Jayne Peressini, Nicole Rochette, and moderated by Ros Gold-Onwude. These women each brought fantastic insights and diverse perspectives to the stage, and I thought it was cool of Dapper Labs to celebrate the diversity of their own team. 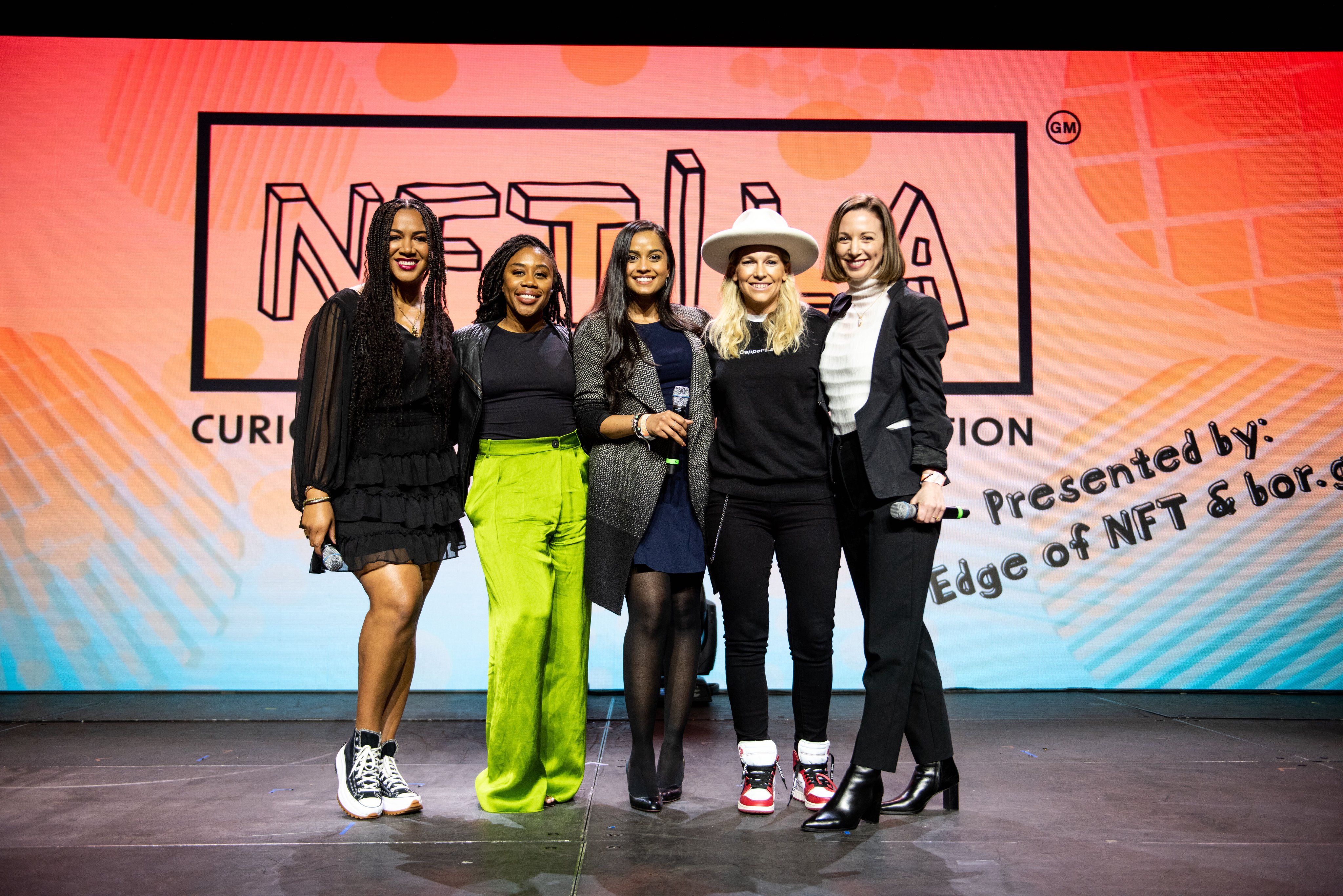 I’ll see you at NFT NYC in June!

Happy Thursday NFT fam! We hope you have all had a great week so far. It’s time to celebrate the weekend in NFT style. So, without further ado, below are this weekend’s metaverse NFT events highlights in Decentraland and Cryptovoxels.

The 1st NFT Movie Festival is a one-day event with a rich schedule of speakers and networking. The event will also be live-streamed on Decentraland for any attendees who are unable to reach Cannes, combining high-level offline networking and an all-around metaverse experience. 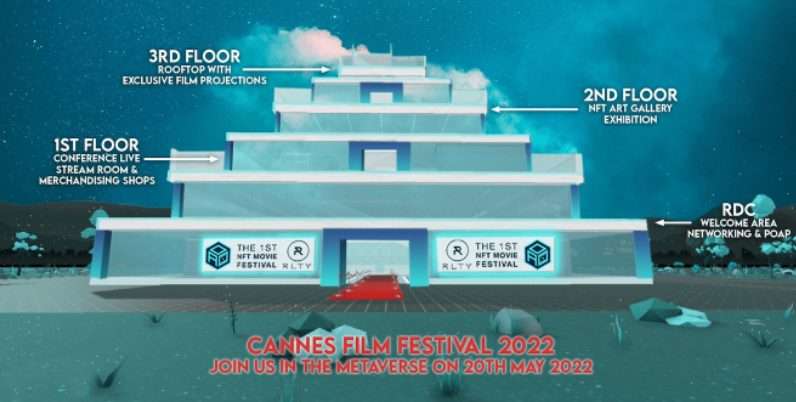 Play Magic the Gathering Arena on the big screen, plus check out DCL’s best made wearables during immersive interactive mini games!! 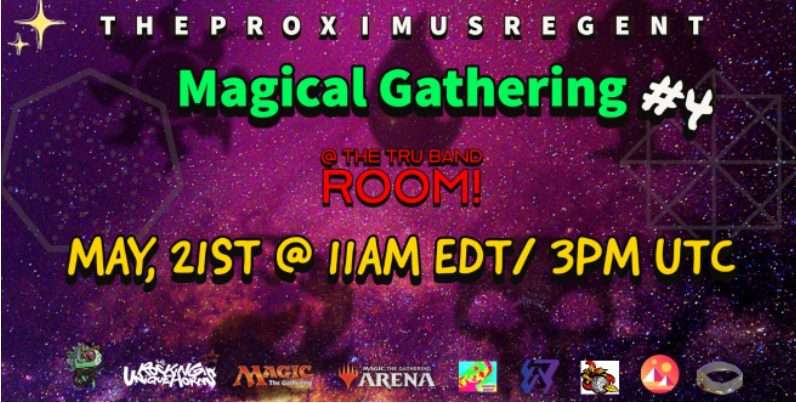 A different parkour challenge every week! Finish it, submit your screenshot, claim your POAP NFT!

Across almost any context in life, there is always value in having something created by an actual recipient of the product being made. NFT marketplaces are no different, which is why a skilled consortium of digital asset enthusiasts have come together to build Golom, a one-stop solution for NFT trading where users can benefit from the lowest trading fees and an array of analytical tools.

With a permission-less and decentralized protocol at its core, Golom offers an experience which allows anyone in its ecosystem to set up their own exchange. In addition, and with aid from its native token $GOLOM, the platform rewards all those who trade on the platform. Its integration of all ERC721 and ERC1155–based collections allows for rewards irrespective of your NFT-related preferences and quirks.

With regards to its platform fees, Golom charges a 0.5% trading fee on all trades made via its contracts, with 100% of these fees going to stakers. The Golom contracts were each written from the ground up, minimizing gas fees and allowing users to enjoy ~40% less gas fees than other marketplaces.

Golom also gives users the power to decide how much royalty they wish to pay, with amounts ranging from 0% to 10%.

To distinguish itself from other marketplaces which hide orderbooks, Golom’s orderbook is made publicly available on Polygon, allowing anybody to fill and submit orders without using any frontend.

Another distinguishing feature of Golom is the fact that it’s the first exchange to be a full stack platform with a ton of NFT analytical tools at its disposal. With collection facets such as traits, rarity, transactions, volumes, top holders, minters, portfolio analysis, and much more all available for integration, Golom users are given the purest sense of alpha insight when navigating the platform.

A dynamic which fully embodies Golom’s community-rewarding mission is no other than its actual reward system. To ensure full transparency in the way $GOLOM will be distributed, the project has outlined that none of the tokens will be allocated to the initial team, VCs, or any promoters (nor will there be any sale of tokens). Instead, 70% will be allocated to users who trade or stake, 15% will be airdropped (to users who fulfil certain requirements), 5% will be given to initial traders during the genesis period, and 10% will go to the project’s treasury.

With Golom’s 100% revenue-sharing policy, stakers are always ensured that they will be rewarded with 100% of the revenue, and also retain the same percent ownership of the protocol as inflationary rewards prevent stakers from being diluted by emissions.

DeFi Land, one of the top three games on the Solana blockchain, is adding plan-and-earn elements to its ecosystem. The game currently has over 7,500 daily and 25,000 monthly active users having a blast farming, fishing, shooting, driving harvesters, and taking care of pets.

With the introduction of the new gaming mechanics, players will earn the native $DFL token as a reward, along with a new in-game currency dubbed $GOLDY. Players can use these currencies to upgrade their in-game NFTs or customize, craft, repair, and socially interact with others.

The NFT collection was received with open arms by the community as it sold out in 16 seconds on launch day, raising a total of $1.75 million. The NFTs have also recently seen a massive 2.5x increase in floor price on the OpenSea and Magic Eden marketplaces.

In order to use the new play-and-earn features, players must own one DeFi Land Gen-0 NFT. The good news it that players don’t need starting funds to access DeFi Land, all thanks to the game’s free-to-play approach. Using the free mode, players can collect XP and go up the leaderboard to participate for monthly prizes, including DFL, GOLDY, and in-game NFTs. 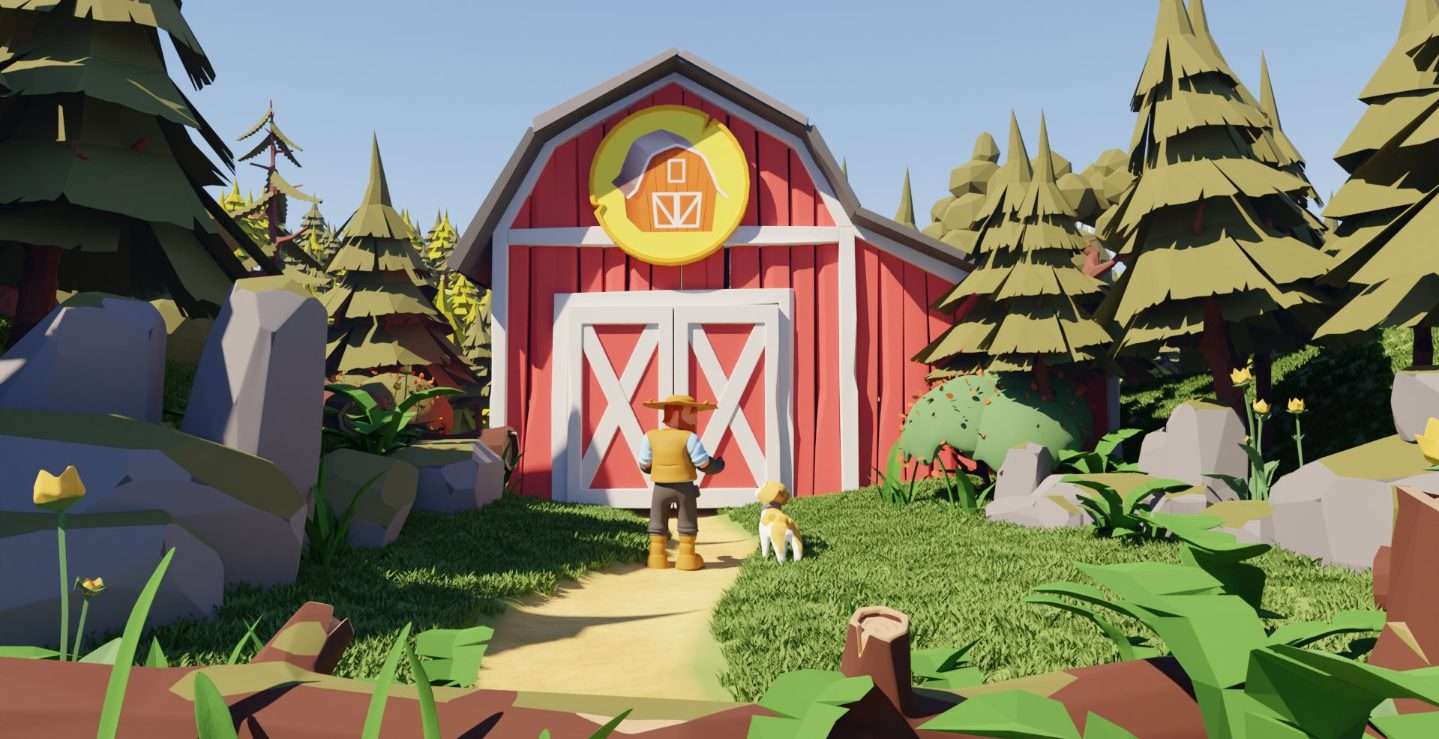 This new breed of play-and-earn launched on May 18th, and is now available to all users. The game has already received incredible support and interest without offering monetary rewards, so this move will certainly enhance its appeal even more in the blockchain gaming ecosystem. DeFi Land is already the third biggest game in terms of market cap and still holds the title of the first-ever gamification project built on Solana.

Along with the launch of play-and-earn mechanics, DeFi Land also recently collaborated with STEPN, and plans to explore a multichain future over the coming months, with more announcements regarding chain integrations to follow in June. An alpha mobile version of the game is in development and is expected to be released in Q3 2022.

DeFi Land is a multi-chain agriculture simulation web game created to gamify decentralized finance. The game will have all the features that traditional platforms have, but it will be gathered all in one place. DeFi Land gamifies decentralized finance by turning investment activities into games.

I tried (and failed) to channel my inner Bezos

Why is technological transformation significant for your business? – Expert talks with Hudi Shehu

U.S. Supreme Court Delivers Bad News For Immigrants on May 16, 2022

Having a plan is the key to gains…in my opinion! Coffee and Crypto with King #shib #saitama

Volkswagen Tiguan R review – more fun than an SUV should be?

the Metaverse of the art-NFT market, with 35 years of unique experience in virtual worlds.

4 questions every CISO should be asking about the metaverse – TechCrunch