Japan’s wholesale inflation near steady at 9.3% as commodity prices ease By Reuters 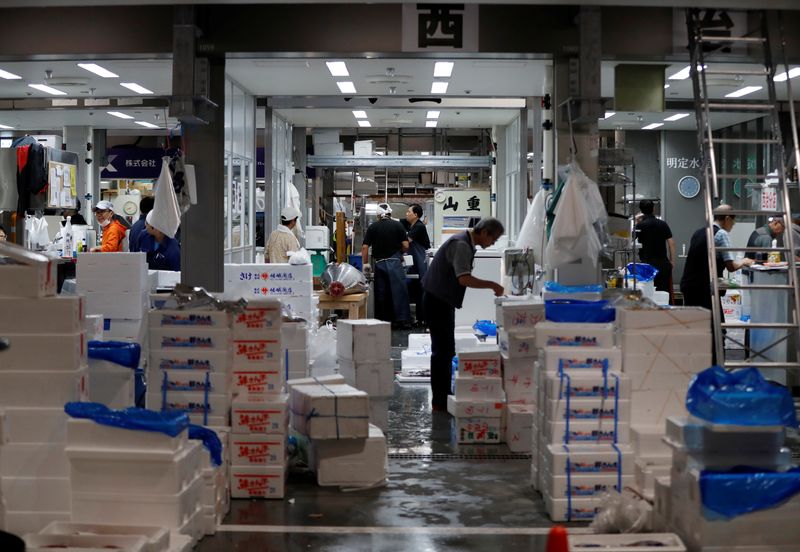 © Reuters. A fishmonger works at a wholesalers’ area on the opening day of the new Toyosu fish market, which has been relocated from Tsukiji market, in Tokyo, Japan, October 11, 2018. REUTERS/Issei Kato/Files

TOKYO (Reuters) – Japan’s November wholesale prices rose 9.3% from a year earlier, data showed on Monday, a rate of increase that was almost unchanged from the previous month and showed initial signs of an inflation peak amid easing global commodity prices.

It was the 21st consecutive month to show an annual rise in wholesale prices.

While food and energy costs continued to rise, the data may offer some relief for Japan’s economy, which relies almost entirely on imports for fuel and raw material.

The rise in the corporate goods price index, which measures prices that companies charge each other for goods and services, exceeded market forecasts for a 8.9% percent gain but was slightly below the revised 9.4% annual increase seen in October.

The yen-based import price index in November was 28.2% higher than a year earlier, slowing sharply from October’s revised annual surge of 42.3%, according to the Bank of Japan (BOJ) data. The currency has rebounded from multi-decade lows, moderating rises in import costs.

“Companies were passing on rising raw material costs for a broad range of goods. But some goods saw the impact of recent easing of global commodity prices,” a BOJ official told a briefing.

Petroleum and coal goods prices were up 0.5% in November from a year earlier, slowing from a revised 2.8% gain in October, the data showed.

Global commodity prices and the weakness of the yen, which boosts the cost of imports, have been pushing up Japan’s wholesale and consumer inflation – a trend that policymakers worry could hurt Japan’s fragile economic recovery.

Terra co-founder Do Kwon hiding out in Serbia, says authorities