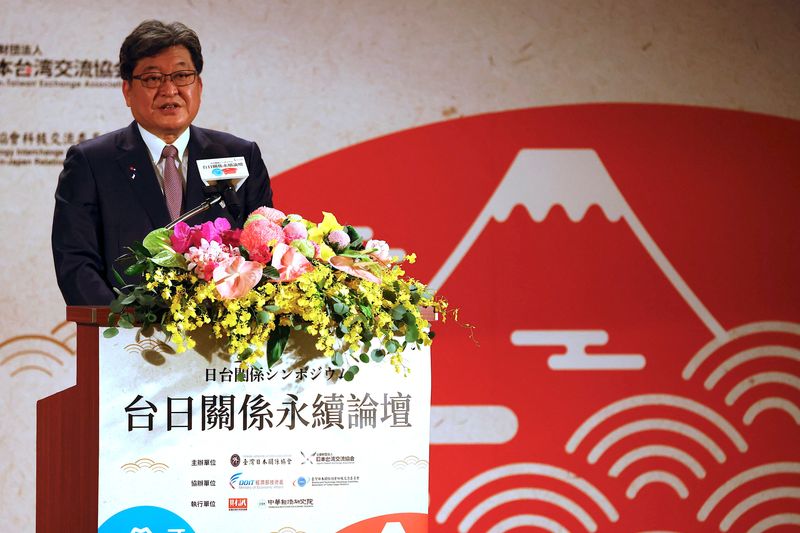 TAIPEI (Reuters) – Japan needs to increase its military spending in the face of the “grim reality” of the threat from China and North Korea, a senior member of Japan’s ruling Liberal Democratic Party said on Sunday during a visit to Taiwan.

Although Chinese-claimed and democratically-governed Taiwan and Japan do not have formal diplomatic ties, they have close unofficial relations and both share concerns about China, especially its increased military activities near the two.

Koichi Hagiuda, the LDP’s policy chief and a former industry minister, said during a visit to Taipei that since World War Two Japan has “walked the path of peace” and that path will not change in the future.

“However just reciting the word peace is of course not enough for our peace to be protected,” he told a forum on Japan-Taiwan relations.

As Japan prepares next year’s budget Prime Minister Fumio Kishida has already announced plans to lift defence spending to an amount equivalent to 2% of gross domestic product within five years, from 1% now.

That would take Japan’s annual defence budget to more than 11 trillion yen ($80.55 billion) from 5.4 trillion yen currently, giving the country the world’s third-largest military budget after the United States and China at their current levels.

Hagiuda pointed to China’s massive increase in military spending, as well as North Korean missile tests, as reasons for Japan to raise its defence budget.

“In the face of such a grim reality, half measures have no meaning at all.”

Japan’s defence capabilities are necessary to protect lives and peace and must be developed immediately, not within five years, he added.

“It’s important to show clearly that we have sufficient capacity to make any would-be aggressor think twice.”

China staged military drills near Taiwan in August to express anger at a visit to Taipei by then-U.S. House Speaker Nancy Pelosi, including launching five missiles into the sea close to Okinawa, within Japan’s exclusive economic zone.

Japan hosts major U.S. military bases, including on Okinawa, a short flight from Taiwan, which would be crucial for any U.S. support during a Chinese attack.

The United States is bound by law to provide Taiwan with the means to defend itself, though there is ambiguity about whether it would send forces to help Taiwan in a war with China.

Addressing a think-tank in Taiwan last December, the late former Japanese Prime Minister Shinzo Abe said Japan and the United States could not stand by if China attacked Taiwan, and Beijing needs to understand this.