Is the Euro Uninvestable? The FX Question du Jour


The euro’s value relative to the US dollar (EUR/USD) recently dipped below parity for the first time since 2002. So precipitous and rapid has been the decline in EUR/USD over the past year that many mean reversion/short gamma funds have had to liquidate and return the remaining capital to investors. Hence the question posed in the title above.

While charged buzzwords like “uninvestable” should be used with caution, the Russia–Ukraine war has clearly exposed and exacerbated the eurozone’s vulnerabilities. But to answer the underlying question, we need first to explore the literature on exchange rates and see what explanatory model (or models) works best.

The Suite of Models: Different Horses for Different Courses

Is there an overarching gestalt framework for currencies? Or do distinctions among developing and emerging markets, major and minor markets, and reserve currencies like the USD and the EUR necessitate multiple frameworks? The balance of payments (BOP) method offers key insights in all cases, with its classic accounting identity for economic adjustment: Savings − Investment = Income − Expenditure = Exports – Imports.

But the differences in the financial/capital accounts — mobile vs. restricted as allowed by regulations — and the nature and scope of monetary policies, from the traditional to the unconventional, make certain models more applicable in some domains than others. What does the purchasing power parity (PPP) approach, which measures the relative price of goods, tell us about the EUR? Could the portfolio balance approach, which gauges the relative price of assets, help us understand how quantitative easing (QE) has affected the transmission channel of international portfolio investments?

Needless to say, the eurozone, currently comprising 19 member states that have adopted the EUR, is far more complex to analyze than a single sovereign state. Importantly, the eurozone is a monetary union without a fiscal union. Given the lack of a federal fiscal authority, the European Central Bank (ECB), along with its  price stability mandate, has also assumed de facto responsibility for countering financial fragmentation risk through containing core-periphery credit spreads. Then-ECB president Mario Draghi made that especially explicit in his famous “Whatever It Takes” speech of July 2012. Indeed, the interest rate spread between the German and Italian bonds, or the Bund–BTP spread, is currently a top concern. The ECB’s added role in reducing the redenomination risk premia on the periphery gives it extra leeway during easing cycles but makes it harder to tighten amid resurgent inflation.

REER vs. NEER vs. EUR/USD

FX professionals gauge the value of one currency against a set of other currencies. So, the question is not so much whether the EUR is uninvestable but, rather, how well the EUR compares with other currencies — USD, JPY, GBP, CHF, CNH, etc. With multiple crosses available for trading, FX, as an asset class, seeks to monetize relative value. In popular parlance, the search is for the cleanest dirty shirt.

Broad trade-weighted real effective exchange rate (REER) readings for the eurozone show that the EUR has been significantly undervalued since mid-2014 and remains so today. It currently stands at 92, with a reading below 100 indicating the currency is undervalued. What are we to make of this? To assume that the EUR is the currency of the future and always will be is not enough. Rather, we need to explore how the ECB’s unconventional monetary policies contributed to this outcome.

Since mid-2014, the EUR’s trade-weighted nominal effective exchange rate (NEER) has shown a flattish return, and the EUR/USD pair has fallen by 27%. To be fair and consistent, we must compare REER to NEER trade-weighted indices, not bilateral EUR/USD performance. Still, this begs the question: Are there structural reasons for the EUR’s outsized underperformance compared with the USD? That depends on how the ECB’s policies have affected the eurozone’s balance of payments (BOP) through its current and financial accounts.

The ECB’s balance sheet has more than tripled, to 82% of the eurozone’s GDP since 2015, due to both QE and targeted longer-term refinancing operations (TLTROs). By comparison, the US Federal Reserve’s balance sheet stands at 36.5% of GDP. The ECB now owns about 30% of all outstanding sovereign bonds as well as a sizeable share of private-sector bonds through the corporate sector purchase programme (CSPP). The ECB’s buying spree has had such a profound effect that net sovereign issuances were consistently negative from 2015 to 2021.

The ECB has effectively created a shortage of EUR-denominated bonds and compressed the nominal long-term risk-free rates in the eurozone. Cross-border portfolio rebalancing has been a key transmission channel for these unconventional policies. In fact, in mid-2014, historic portfolio outflows commenced as both resident and non-resident investors moved out of EUR-denominated debt securities and into the closest substitutes outside the EU. The largest cumulative net purchases were of long-dated debt securities issued by US entities.

The portfolio balance approach focuses specifically on the bond market as a driver of exchange rates. The model is better suited to currency pairs in developed markets, such as EUR/USD, since portfolio flows are very sensitive to market variables. In this model, monetary and fiscal conditions lead to changes in the supply and demand for domestic currency bonds relative to foreign currency bonds, which in turn, impacts the FX rate.

Given the relative size and scale of the ECB’s unconventional monetary policies and the historic levels of cross-border portfolio rebalancing, the portfolio balance approach provides an elegant explanation for the massive collapse in EUR/USD between 2014 and 2015 — a peak-to-trough depreciation of 25% — and marks the inflection point where the EUR/USD gapped away from the EUR NEER.

Fast forward to today: With the widening divergence between the ECB and the Fed responses to inflationary pressures, another dramatic period in the EUR/USD pair has begun. In the past 12 months, the EUR has depreciated by 16% against the USD but only by about 6% in NEER terms.

Although it jettisoned its negative interest rate policy (NIRP) in July 2022, the ECB has been significantly behind the curve in the rate-hiking cycle, even with the market pricing in a significantly lower terminal rate: 2.50% compared with the Fed’s 4.50%. In stark contrast to German Bunds, real US Treasury yields are now positive from the two-year horizon onwards. Also, while the Fed has confidently telegraphed monthly redemption caps under its quantitative tightening (QT) program, the eurozone’s outlook is much less clear. Recent data shows the ECB used the “flexibility” of the pandemic emergency purchase programme (PEPP) as a “reinvestment scheme” for the first time in July 2022: It simultaneously sold bonds from the core and bought those from the periphery — with a net–net result on its balance sheet of roughly zero. Essentially, to keep the core-periphery spreads in check, the ECB has now started doing QT (core) and QE (periphery) at the same time — but without specifying any conditionalities.

So, what about the future of the EUR/USD? The Fed’s balance sheet is shrinking much faster than the ECB’s, which is especially concerning. Why? Because it’s not just about relative bond pricing but also the investable universe of the available EUR-denominated bonds. According to the portfolio balance approach, a growing supply of domestic bonds will be met, at the market clearing price, with higher demand for domestic bonds. This would prompt portfolio reallocation from USD- to EUR-denominated bonds and an appreciation in EUR/USD. In the context of eurozone–US portfolio flows, with both sides holding reserve currency status, this makes intuitive sense, though not if capital allocation limits are a serious impediment between the two jurisdictions.

What Does the Future Hold?

The fight against financial fragmentation has handicapped the ECB. The eurozone’s payment system — TARGET2 — has become lopsided and unbalanced. The Deutsche Bundesbank now has more than €1.1 trillion in claims on the rest of the Eurosystem — think German EUR vs. Italian EUR. This has made redenomination risk premia all the more topical.

Amid such challenges, policymakers need to remember this adage.

Reducing economic and financial fragmentation requires more effective and integrated fiscal policy. The impetus has to shift decisively from the monetary to the fiscal.

For most of its existence, the EUR has been bolstered by EU trade surpluses. Such surpluses provided support when persistent capital outflows put pressure on the currency. But rising energy prices have created a terms-of-trade shock that has shifted the trade balance into deficit. If geopolitical turbulence subsides and the previous energy status quo is restored, then the EUR can recover. But hope is not a strategy.

In the past, large current account surpluses also reflected the gap between (high) savings and (low) domestic investments. There is a palpable need to invest at home, not just in alternative energy infrastructure but also in emerging industries and the digital economy. Domestic demand must be cultivated to protect the eurozone from deglobalization and geopolitical shocks. To accomplish this shift, Germany will need to become less of an exporter of capital, or exportweltmeister.

For highly mobile capital markets, portfolio flows have grown exponentially more important than trade flows. The eurozone’s international investment position (IIP) shows cumulative outward portfolio investments of over €6 trillion in just debt securities at a gross level, the buildup of which materially increased with QE and related policies. We can reasonably expect some foreign debt securities to be replaced by domestic alternatives, provided the ECB reduces its balance sheet and allows for a more vibrant fixed-income market and a return of price discovery. Such an outcome, combined with a change in sentiment, could boost the EUR/USD.

A deeper fixed-income market would not only increase the EUR’s share of FX global reserves, from its current 20%, but it could also persuade foreign entities to issue EUR-denominated eurobonds, which now make up 25% of the total. If the EUR played a larger role as an international debt currency, there would be more demand in the currency during risk-off periods due to the associated deleveraging and squaring of loans — just like the prevailing dollar smile phenomenon.

FX is the stuff of life — no day is like the previous one! With average daily global FX volumes now topping $6 trillion and the EUR/USD the most traded pair, at 27% of volumes, there are multiple and complex interactions that need to be considered, including market sentiment and derivatives flows. Practitioners need to be curious students as well as multi-dimensional thinkers. With respect to the outsized depreciation in EUR/USD vs. EUR NEER, the portfolio balance approach is a critical tool in FX analysis: It injects explanatory power into the performance of the EUR/USD.

Encouragingly, similar to the word “impasse,” “uninvestable” is a transitory term, but something has got to give. The combination of financial repression and trade deficits leads to fast deprecation, especially when there is a substitutable outlet for portfolio investments. A reduction of the ECB’s balance sheet and a serious effort to achieve positive real interest rates will be key to ensuring a turnaround in the fortunes of the EUR/USD.

Off the Target: The Stagnating Political Economy of Europe and Post-Pandemic Recovery by Muhammad Ali Nasir 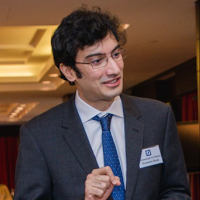 With 20 years of experience in international banking, Mohammad Ali Shaikh, CFA, is currently working on setting up a macro fund through Ilqa Investments, a firm he co-founded. Prior to moving to the buy-side, he held several senior positions at international banks, with his last role serving as head of rates and FX, ICG, MEA, at Deutsche Bank. He is a graduate of McGill University, where he majored in finance, and is currently pursuing an executive MBA from INSEAD.

The 5 Best Cybersecurity ETFs To Buy in 2023

US prosecutors seek to ban SBF from Signal after…