A G20 plan to give debt relief to poor countries during the pandemic has fallen far short of expectations, with low-income borrowers deferring less than a quarter of the repayments they owed, a report has found.

Private creditors deferred repayments worth just 0.2 per cent of what they were owed in the 14 months to June this year, according to a study to be published on Wednesday by the Jubilee Debt Campaign, seen by the Financial Times. More than half of the relief that was granted came from China.

The 46 countries that applied for the G20 initiative, known as the DSSI, made debt repayments of $36.4bn between May 2020 and June 2021, with just $10.3bn of repayments pushed into the future and only $600m written off. Another 27 low-income countries were eligible for the scheme, operated by the G20 in collaboration with the IMF, the World Bank and the Paris Club of official bilateral creditors. But they declined to take part.

At the same time, the debts of those countries continued to pile up as they borrowed to deal with the pandemic. World Bank data released this week shows that the 73 countries eligible for the DSSI borrowed an additional $90bn during 2020, bringing their total debt to $860bn at the end of the year.

David Malpass, president of the World Bank, said the build up in debt was part of a “tragic reversal in development across many dimensions” brought on by the pandemic. “My concern is that there is not a process to deal with the amount of debt,” he said.

Separate data from the United Nations Conference on Trade and Development (Unctad) shows that developing countries overall took on an additional $500bn of debt last year, bringing the total to $11.3tn.

The 46 countries taking part in the DSSI repaid $11bn to bilateral lenders — foreign governments and their development agencies — and suspended payments totalling $10.3bn, or 48 per cent of the amount due, according to Jubilee’s analysis of World Bank data. 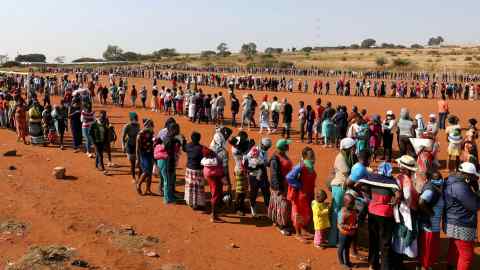 The IMF cancelled repayments of $600m but the debtor countries made other repayments on multilateral loans — from the IMF, the World Bank and other development banks — of $10.4bn during the period.

The biggest total payments went to private creditors — commercial banks, commodity traders and bondholders — which received $14.9bn, with just $24m suspended, or 0.2 per cent of the amount due.

“The failure to make banks, hedge funds and oil traders take part in the G20’s flagship debt-suspension scheme has made a mockery of this initiative,” said Tim Jones, head of policy at the Jubilee Debt Campaign. “[The] scheme has effectively become a bailout programme for private lenders.”

The G20 initiative began in May last year and runs until the end of this year, having been twice extended. It will be replaced by a G20 “common framework” on debt treatment, under which countries facing debt distress will agree workouts with bilateral creditors. They will then be obliged to seek comparable terms from multilateral and private sector creditors.

So far, only Chad, Ethiopia and Zambia have signed up to take part.

Why Menards was the key to a $70M development that could be last of its kind for St. Louis area

No-Till in the USA