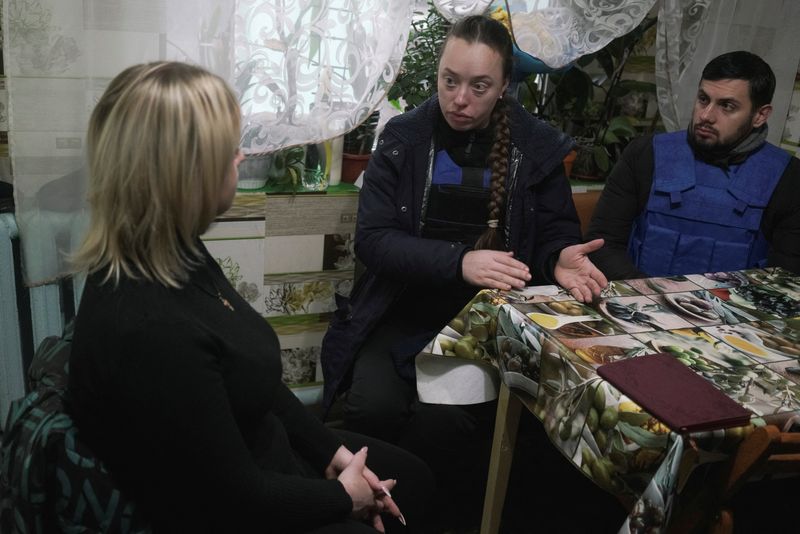 By Anthony Deutsch and Anna Voitenko

KHERSON, Ukraine (Reuters) – An international team of legal advisers has been working with local prosecutors in Ukraine’s recaptured city of Kherson in recent days as they began gathering evidence of alleged sexual crimes by Russian forces as part of a full-scale investigation.

The visit by a team from Global Rights Compliance, an international legal practice headquartered in The Hague, has not previously been reported.

Their efforts are part of a broader international effort to support overwhelmed Ukrainian authorities as they seek to hold Russians accountable for crimes they allegedly committed during the conflict, now nearly 10 months old.

Accusations surfaced soon after Russia’s Feb. 24 invasion of rape and other abuses across the country, according to accounts Reuters gathered and the U.N. investigative body.

Moscow, which says it is conducting a “special military operation” in Ukraine, has denied committing war crimes or targeting civilians, and the Kremlin denies allegations of sexual violence by the Russian military in Ukraine.

The Russian defence ministry did not immediately respond to questions for this article.

Russian Foreign Ministry spokeswoman Maria Zakharova said on Dec. 9 that a UN Human Rights report about Russian attacks on civilians was based on “rumours and gossip”, and Moscow has accused Ukrainian forces of brutal reprisals against civilians who cooperated with Russian forces.

The scale of the Ukrainian prosecution’s task is daunting, with the number of alleged international crimes running into tens of thousands and as war in the east and south of the country makes already complex work more difficult and dangerous.

“We’ve come down here for a three-day mission to support the Office of the Prosecutor General (OPG), and specifically the team investigating conflict-related sexual violence,” said Julian Elderfield, one of the legal advisers who took part in the Kherson visit that ran from Thursday to Saturday.

“(It’s about) asking the right questions, pursuing unique or different lines of investigation that might otherwise not have been pursued by local investigators,” he told Reuters in Kherson on Saturday.

Kherson was occupied by Russian forces for months before Ukrainian troops recaptured it in early November, in one of Moscow’s biggest military defeats of the war so far.

Some residents who remained during the occupation have described being detained and tortured, repeating allegations made by Ukrainians across territory that has been reclaimed by local forces in recent months.

More than 50,000 alleged incidents of international crimes have been reported by Ukraine’s prosecutor general since Russia’s full-scale invasion.

They include hundreds of potential cases of alleged war crimes, genocide and crimes of aggression, some of which could be escalated to overseas tribunals like the International Criminal Court (ICC) if they are deemed sufficiently serious.

In June, Ukraine held a preliminary hearing in its first trial of a Russian soldier charged with raping a Ukrainian woman during Russia’s invasion. The suspect was not in Ukrainian custody and was tried in absentia.

They joined Ukrainian prosecutors visiting hospitals, a local aid distribution centre and other sites to pursue lines of investigation and interview victims of alleged abuses, including sexual violence.

Whether Russian commanding officers are to blame, or subordinates who carry out their orders, is one of many thorny issues to be resolved in the future, local investigators said.

Anna Sosonska, deputy head of Ukraine’s eight-member war crimes unit for sexual violence, told Reuters she would supervise the investigation and look into the possible role of Russian political and military leaders in any crimes.

“Аccording to the results of this trip, we discovered the facts of conflict-related sexual violence and the information has been entered into the unified register of pre-trial investigations.”

Rape can constitute a war crime under the Geneva Conventions that establish international legal standards for conduct of armed conflicts. Widespread or systematic sexual violence could amount to crimes against humanity, generally seen as more serious, legal specialists said.

Serhii Doroshyn, deputy head of the national police’s Investigation Department in Crimea and Sevastopol, told Reuters the unit had questioned about 70 people so far. Many of them said they had been held at up to 10 detention centres in the Kherson region during Russia’s occupation.

He added that more than half said they had been subjected to various forms of sexual violence. There are likely to be many more witnesses, he added.

“We find someone, conduct investigative actions, question, find information and then look for other people … We conduct them despite the situation, despite the shelling,” he said.

Doroshyn added that Kherson differed from the capital Kyiv, where investigators had been most active until now, because it had been occupied by Russian forces for so long.

“There were well-established temporary detention facilities, the so-called ‘torture chambers’, where up to 30-40 people could be brought daily,” he said.

“That is, massive work was carried out here. Of course, they did not observe any laws, conventions and statutes.”

Elderfield said sexual violence was not always given the prominence it should have in national and international investigations. Social stigma and shame contributed to under-reporting, he added.

A further challenge lies in the fast-shifting dynamics of the war.

Teams like his are likely to have to move in and out of contested areas quickly, and the sound of distant explosions while Reuters reporters accompanied investigators in Kherson last week were a reminder of the ongoing fighting.

Witnesses have fled the area and need to be found, and people may also be nervous about speaking out when it is unclear whether Ukrainian troops will be able to hold the territory they have recaptured for long.

“The proximity of the ongoing conflict has really impacted the Ukrainian prosecution office’s investigation in Kherson,” Elderfield said.