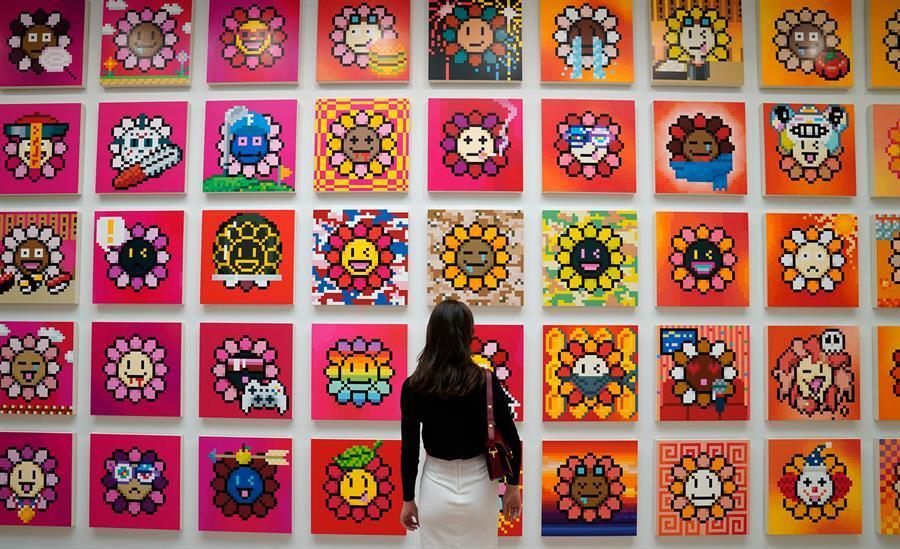 Takashi Murakami is known for blending pop art and Asian fine arts, but for his latest exhibition in New York, he is moving into the metaverse.

At the show “An Arrow Through History” that opened this week at Manhattan’s Gagosian Gallery, Murakami builds bridges from traditional fine arts to Japanese pop art to buzzy NFTs, the digital tokens that represent original artwork.

Murakami told AFP he is concerned that younger generations are screen-obsessed and “don’t understand the contemporary art history.”

“They can enjoy very few things, but with the plus of augmented reality, maybe the young people open their eyes more and then step into the contemporary art scene,” the 60-year-old Japanese artist said.

Of late, athletes, artists, celebrities and tech stars have been hawking NFTs, which use the same blockchain technology as cryptocurrencies.

“When I work on a creative production, I make no distinction between digital and analog,” Murakami said in a statement from Gagosian.

“I’m always working in the context of contemporary art, and that context is all about whether I can be involved in events that manage to trigger a cognitive revolution.”

In one piece, Murakami painted thick canvases and wooden structures the blue and white patterns of fish, inspired by Chinese porcelain vases dating back to the Yuan Dynasty (1279-1368).

Using Snapchat and an augmented reality filter, visitors can be immersed in the exhibition room via their phones, standing among digital images of fish that swim among the physically real works of art.

“Japanese culture originally came from the Eurasian continent, and my concept has been to go beyond from there into the metaverse, shooting through the history of art with a single arrow,” Murakami said in the statement.

The metaverse is an immersive virtual reality which is accessible with augmented or virtual reality glasses, and is a concept that has experienced a boost in recent years.

Stuck at home during the coronavirus pandemic, Murakami told AFP that “I was watching the reality in my house, so that was a very monumental moment.”

“For us it was getting super stressful every day, we could not go outside,” he said but his kids could enjoy VR.

“That meant I had to change the mind, to fit in with the next generation of my kids,” he said. “This is my first answer, the show.”

Murakami is also set to open a special exhibition at The Broad contemporary art museum in Los Angeles, titled “Takashi Murakami: Stepping on the Tail of a Rainbow,” which will include immersive environments and run from May 21 until Sept. 25.

In 2021, three otherwise unassuming letters would upend the worlds of cryptocurrency, technology, art, and pop culture all at once. NFTs, or non-fungible tokens, were propelled into the mainstream after an unprecedented $69.4 million sale at the historic art auction house Christie‘s in New York City.

The sale of digital artist Beeple‘s Everydays at Christie’s for $69.4 million marked the beginning of a seemingly unstoppable NFT wave, where everyone from digital artists to mainstream celebrities like Paris Hilton, Mark Cuban, Steve Aoki and many others began creating, selling, and collecting NFTs via cryptocurrency on the Blockchain.

While NFTs initially focused on the importance of ownership of digital assets, they soon also became part of a social movement where groups of creators and collectors began communities based on buying and selling NFTs. Some early examples of these groups include CryptoPunks and Bored Ape Yacht Club, but many more have since risen in popularity as the world of NFTs continues to expand and propels new digital artists, like 17-year-old Diana Sinclaire, to international fame.

Following the journey of digital artist Beeple, aka Mike Winklemann, through the historic sale of his Everydays work, “NFTs: Enter the Metaverse” illuminates the social and economic factors that led to the rise of NFTs as well as the implications of NFT technology on the future of the Metaverse. The documentary features appearances by Paris Hilton, Gary Vaynerchuck, Mark Cuban, Steve Aoki, 3Lau, Rebecca Jarvis, Kelly Crow, Kenny Schacter, Diana Sinclair, Daniel Maegaard, and Karsen Daily.

Watch “NFTs: Enter the Metaverse” premiering on May 21st on ABC (check your local listings), ABC News Live and the Localish Network.

Will the rise of the metaverse see a move to not only wearing VR goggles, but full body suits to feel the wind, fresh water and even to act as the protagonist in our favourite movie?

Time will tell. But the sense of reality companies eventually develop, and how people react, will be key for companies, fund managers and investors to capitalise on what has been called the next big disruption – the metaverse.

In the keynote address at Citywire Montreux 2022, researcher and broadcaster Stephanie Hare delved into the tricky questions that surround the great push towards virtual, augmented or mixed realities.

The military’s version of a metaverse doesn’t quite align with Mark Zuckerberg and Meta’s vision for a virtual world for us to inhabit.

Using augmented reality (AR), two fighter pilots completed a high-altitude drill a few thousand feet high over the desert of California on May 10th. Flying a pair of Berkut 540 jets and donning custom AR headsets, the pilots were shown virtual refueling aircraft in the sky, allowing one of the pilots to practice a refueling maneuver with the virtual aircraft.

The augmented and virtual reality (VR) technology, head-mounted displays and artificial intelligence (AI) powered environments being developed by Red 6 allow pilots to take part in virtual dog fights against enemy aircraft and more while pulling several G’s. Red 6 is developing a platform that will allow them to display various scenarios in AR and VR, while using lower latency and higher reliability hardware than consumer-grade AR and VR headsets.

“We can fly against whatever threat we want. And that threat could be controlled either by an individual remotely or by artificial intelligence. What we’re building is really a military metaverse. It’s like a multiplayer video game in the sky,” says Daniel Robinson, founder and CEO of Red 6.

AR and VR have become staples of military training of late in projects like Project Avenger and Project BlueShark. Now, the military is setting its sights on integrating various technologies to create more interconnected virtual systems, and recently held a high-level conference in a virtual environment attended by more than 250 people from across the world.

“It is an extremely complex type of simulation, especially given the fidelity that the military demands. You can either have live players who are participating in the simulation or [characters] can be AI-enabled, which is often what the military does,” said Caitlin Dohrman, general manager of the defense division of Improbable, a company that develops virtual world technologies.

Read more: Takers of the first-ever black hole photo have a massive announcement

I tried (and failed) to channel my inner Bezos

Why is technological transformation significant for your business? – Expert talks with Hudi Shehu

U.S. Supreme Court Delivers Bad News For Immigrants on May 16, 2022

Having a plan is the key to gains…in my opinion! Coffee and Crypto with King #shib #saitama

Volkswagen Tiguan R review – more fun than an SUV should be?

the Metaverse of the art-NFT market, with 35 years of unique experience in virtual worlds.

4 questions every CISO should be asking about the metaverse – TechCrunch