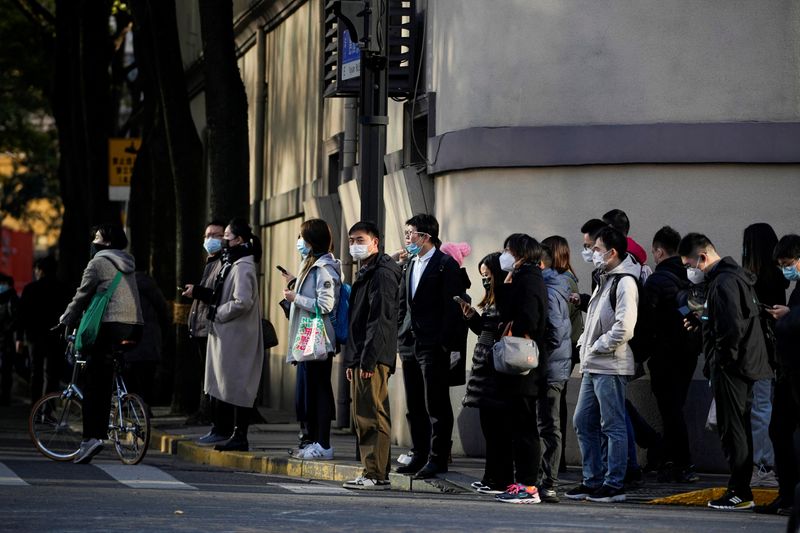 By Brenda Goh and Sophie Yu

BEIJING/SHANGHAI (Reuters) – Tired of being cooped up to comply with China’s strict anti-COVID rules, people awaited clarity on an easing of restrictions that could be announced as soon as Wednesday, while the more cautious rushed to buy cold medicines and home test kits.

After President Xi Jinping chaired a meeting of the Communist Party’s politburo, state media fed the growing sense of anticipation by reporting that China should seek “to better coordinate epidemic policies with economic and social development”.

Widespread protests against some of the world’s toughest COVID curbs last month were quickly followed by various restrictions being lifted by authorities in some cities, while top officials began toning down their warnings about the dangers posed by COVID-19.

China may announce 10 new national easing measures as early as Wednesday, two sources with knowledge of the matter told Reuters.

That has raised prospects that Beijing may slowly look to align with the rest of the world and start re-opening its economy three years into a pandemic which erupted in the central Chinese city of Wuhan in late 2019.

But the looser curbs – which have included cuts in testing and less onerous quarantine rules – have set off a rush for preventative drugs as some residents, particularly the unvaccinated elderly, feel more vulnerable to the virus.

Authorities across the country have warned of tight supplies and price gouging from retailers in recent days.

“Please buy rationally, buy on demand, and do not blindly stock up,” the Beijing Municipal Food and Drug Administration was quoted as saying in the state-owned Beijing Evening News.

In Beijing’s upmarket Chaoyang district, home to most foreign embassies as well entertainment venues and corporate headquarters, shops were fast running out of some those drugs, according to a resident.

“Last night the medicines were already in stock, and now many of them are out of stock,” said Zhang, a 33-year-old educationist, who only gave one name.

“Epidemic preventions have been lifted…COVID-19 testing sites are mostly being dismantled… So, because right now in Chaoyang district cases are quite high, it is better to stock up on some medicines,” he said.

The surge in demand has driven up share prices in medicine manufacturers including cough syrup producer Guizhou Bailing, and Xinhua Pharmaceutical, which makes 40% of all Ibuprofen sold in China.

The shifting stance from authorities comes after a string of demonstrations last month that marked the biggest show of public discontent in mainland China since President Xi Jinping took power in 2012.

While those protests petered out amid a heavy police presence, there have been pockets of unrest.

In the latest incident, videos posted on Twitter showed university students chanting protest slogans against COVID policies on their campus in Nanjing city. Reuters confirmed that the footage was taken at Nanjing Tech University.

The uneven nature of the easing measures and varying interpretation of the rules from city to city has been an ongoing source of frustration for many people and businesses.

The European Chamber of Commerce in China said in a statement on Tuesday that it was concerned about “the general lack of coordination and policy disparity seen across China, as well as by the overall lack of general information on what changes are to be expected and when.”

“This continues to be a cause of uncertainty for businesses and the public at large,” it said.

What has been more consistent in recent days are messages from officials downplaying the health risks of the virus – bringing China closer to what other countries have been saying for more than a year as they dropped restrictions, and shifted towards living with the virus.

Gu Xiaohong, a top traditional Chinese medicine official, was quoted in the state-run Beijing Daily on Wednesday as saying China should change its official name for COVID-19 to reflect the virus’ mutation and that patients with light symptoms could recuperate at home.