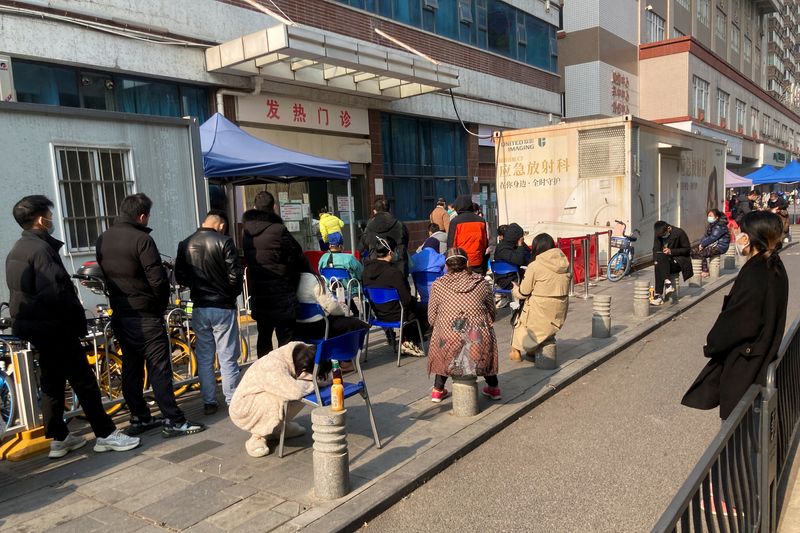 © Reuters. People line up at a fever clinic of a hospital, after the government gradually loosens the restrictions on the coronavirus disease (COVID-19) control, in Wuhan, Hubei province, China December 10, 2022. REUTERS/Martin Pollard

By Ella Cao and Ryan Woo

BAODING, China (Reuters) -When Li tested positive for COVID-19 on Tuesday in Baoding in northern China, he braced for a five-day quarantine at a makeshift local hospital as part of the country’s strict pandemic controls.

Instead, China the next day abruptly relaxed the policy that has made the world’s most-populous country an outlier in a world largely learning to live with COVID.

Li, 30, who asked to be identified only by his family name, told Reuters he was allowed to recuperate at home in the industrial city near the capital Beijing.

But the sudden policy shift caught him off guard – left on his own, he had no medication at home to treat his fever.

“I couldn’t buy any medication at that time, with long queues everywhere outside pharmacies,” Li told Reuters.

Three years after the coronavirus emerged in central China, some citizens had recently launched rare public protests against a zero-COVID policy that had demanded economically disruptive lockdowns and mandatory quarantine in government facilities.

But Beijing’s abrupt policy shift on Wednesday, cheered by some, also sparked apprehension in a country with a relatively low vaccination rate where people had been taught to fear the disease.

The easing in compulsory PCR testing of China’s 1.4 billion people has weakened the ability of health authorities to quickly detect cases and gauge how infections are spreading, disrupting society and the economy.

Since easing the curbs, the authorities have not predicted how many people may fall seriously ill or die. In October, China predicted at least 100 deaths for every 100,000 infections.

Some stocks have been replenished, Reuters found on a visit, with cold relief drugs like Ibuprofen available at many pharmacies. But the popular traditional Chinese medicine Lianhua Qingwen, used for symptoms like fever and cough, and antigen test kits remained harder to find.

Baoding is not alone. Online pharmacies across China have run out of drugs and test kits, prompting the government to crack down on hoarding.

Officials have urged households to report serious symptoms, using self-administered antigen kits. But those kits are still hard to come by, raising the risk the seriously ill might not be treated promptly.

“There will certainly be increasing numbers of infections” in coming weeks, regardless of how many are captured in the test numbers, said Ben Cowling, an epidemiologist at Hong Kong University. Severe infections will also increase, he warned.

And just as more COVID patients are recovering at home, Baoding has been hit by a winter heating supply crunch, adding to the risk of serious illness. Heat was insufficient because of “unstable” coal supplies caused by COVID, state-run Baoding Daily reported, without giving details.

A Baoding resident named Wang, 20, said the temperature in her home was just 18 degrees Celsius (64 Fahrenheit). Two members of her family had COVID.

“We were joking that Baoding residents do not need heat as we can warm ourselves up with our own body temperature,” she said.

Health officials acknowledge the elderly are particularly vulnerable and more vaccination is needed.

The risk of severe illness for those over 65 is five times that of younger people, the risk for people over 75 seven times and nine times for those over 85, while their risk of death is 90, 220 and 570 times higher, respectively, said an official at China’s Center for Disease Control.

But the appeal to the elderly to better protect themselves appears to have been diluted by the simultaneous message that the Omicron variant is not lethal.

Yang, 64, refrained from stocking up. “I have no fear” of COVID, said Yang, a farmer who is fully vaccinated and with no underlying diseases.

China has reported no deaths since easing the COVID curbs, with fatalities to date around 5,200, versus more than 1 million in the United States.

But time will tell if a U.S.-scale death rate, which would mean 4 million dead in China, can be averted.

Machine Learning: Explain It or Bust