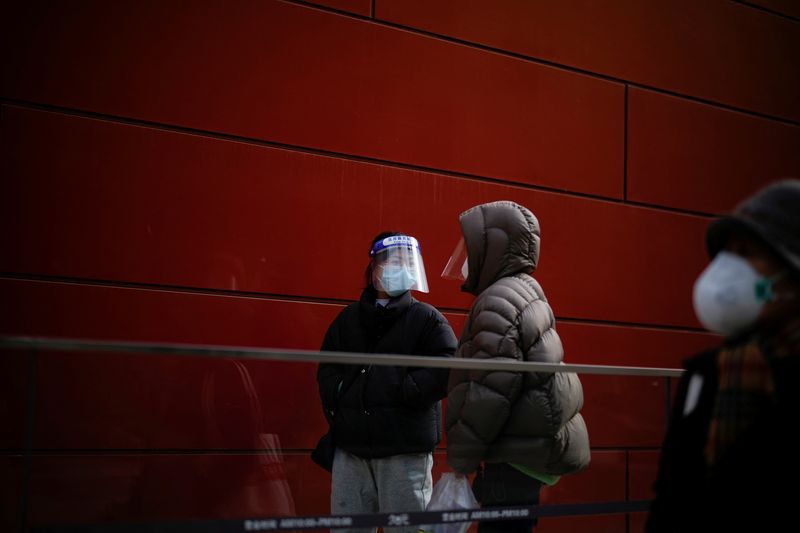 By Eduardo Baptista and Josh Ye

BEIJING/HONG KONG (Reuters) – People queued outside fever clinics at China’s hospitals for COVID-19 checks on Monday, a new sign of the rapid spread of symptoms after authorities began dismantling stringent measures against the disease.

Three years into the pandemic, China is moving to align with a world that has largely opened up to live with COVID, making a major policy change last Wednesday after unprecedented protests against its stifling curbs.

It has dropped testing prior to many activities, reined in quarantine and is preparing on Monday to de-activate a mobile app used to track the travel histories of a population of 1.4 billion people.

Authorities continue to urge mask-wearing and vaccinations, particularly for the elderly.

But with little exposure to a disease kept largely in check until now, China is ill-prepared, analysts say, for a wave in infections that could heap pressure on its fragile health system and drive businesses to a halt.

Lily Li, who works at a toy company in the southern manufacturing hub of Guangzhou, said several employees, as well as staff at suppliers and distributors, had been infected and were at home isolating themselves.

“Basically everybody is now simultaneously rushing to buy rapid antigen test kits but has also somewhat given up on the hope that COVID can be contained,” she said.

“We have accepted that we will have to get COVID at some point anyway.”

In Beijing, the capital, about 80 people huddled in the cold outside a fever clinic in the upmarket district of Chaoyang as ambulances zipped past.

Reuters witnessed similar queues outside clinics in the central city of Wuhan, where COVID-19 first emerged three years ago.

The numbers of patients waiting to be admitted into emergency and fever clinics were growing, a doctor who works in a respiratory department at a Beijing hospital was quoted by the state-backed Global Times newspaper on Sunday as saying.

In recent weeks, local cases have been trending lower since a late November peak of 40,052, official figures show, however. Sunday’s tally of 8,626 was down from 10,597 new cases the previous day.

But the figures reflect the dropping of testing requirements, say analysts, while Chinese health expects have warned of an imminent surge.

In comments on Monday in the state-backed newspaper Shanghai Securities News, Zhang Wenhong, head of a team of experts in the commercial hub, said the current outbreak could peak in a month, though an end to the pandemic might be three to six months away.

China’s stocks markets broadly retreated and the yuan eased from a near three-month high hit in the previous session, as investors fretted that rising infections might disrupt consumption and manufacturing.

But for the same reason demand surged for stocks in Chinese drugmakers, and providers of masks, antigen tests and funeral services.

“Please protect yourself,” the management of a condominium in the capital’s Dongcheng district warned residents on Sunday, saying almost all its staff had been infected.

“Try as much as you can not to go out …,” it said on messaging app WeChat. “Be the first person to take responsibility for your own health, let’s face this together.”

Such messages appear to have hit home for some who say they are reluctant to visit crowded places or dine at restaurants.

That is why few analysts expect a quick, broad rebound in spending in the world’s second largest economy, as the glee that greeted the abrupt relaxations was tempered with uncertainty for consumers and businesses.

Yet China is pushing to free up nationwide travel, even if foreign trips may be a while off.

A state-mandated mobile app identifying travellers to COVID-stricken areas will shut down at midnight on Monday, according to a notice on its official WeChat account.

The number of domestic flights available across China exceeded 7,400, nearly double from a week ago, flight tracker app VariFlight showed.

New home sales in 16 cities picked up last week, in a move partly attributed to the easing of curbs, as people venture out to view homes, the China Index Academy said.