Can UK and EU resolve their post-Brexit dispute?

In July UK Brexit minister Lord David Frost requested a fundamental rewrite of the deal, to eliminate most checks on goods going from Great Britain to Northern Ireland.

The commission responded with four papers on Wednesday that address some of Frost’s demands, but leave several others unanswered. The Financial Times summarises the key issues below.

The Northern Ireland protocol in the UK-EU withdrawal agreement sought to safeguard peace in the region by averting the return of a hard border on the island of Ireland.

But with the protocol placing Northern Ireland in the EU single market for goods, the bloc insisted on customs and regulatory checks on products going to the region from Great Britain. The protocol thereby created a trade border in the Irish Sea.

Business complained these arrangements involved unacceptable levels of bureaucracy, and they were one of several factors blamed for violence in Northern Ireland in April.

In July, the UK government accepted the need for full EU checks on goods going from Great Britain into Ireland and the bloc’s single market excluding Northern Ireland.

But Britain said there was “no need for certificates and checks for individual items” that were part of a traceable supply chain and destined only for consumption in Northern Ireland.

The EU has stopped short of meeting these demands, and instead proposed measures to reduce physical inspections of goods at the border. EU officials said the proposals could end as much as 80 per cent of current checks. 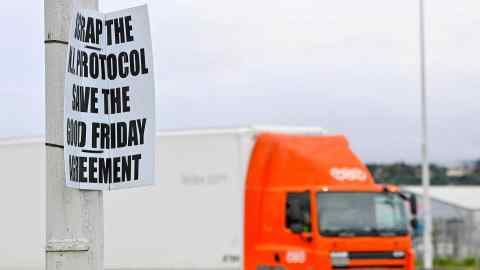 This means a lorry load of supermarket goods with hundreds of products going from Great Britain to Northern Ireland could need just a single certificate which states that all the items meet EU standards and legal requirements.

However businesses will still need to have “detailed documentation” for each product available for electronic inspection by border authorities, with details including proof that the items are UK-made and not imported from another country outside the EU.

Northern Ireland will be exempt from an EU prohibition on the import of chilled meats, such as sausages from Great Britain, provided those products remain aligned with the bloc’s standards.

The EU has also offered to cut customs paperwork, and a broader range of companies will be able to take advantage of a scheme that exempts them from the bloc’s tariffs and some form-filling if they can show their goods are not “at risk” of reaching Ireland.

EU officials said these measures would create an “express lane” that facilitated faster movement of goods from Great Britain to Northern Ireland, while ensuring the products comply with EU rules.

The quid pro quo is that the UK builds full border control posts for inspections of goods, and provides more comprehensive product data and market surveillance information to allow the EU to see that items are compliant with its rules.

UK officials acknowledged the EU proposals went further than expected, but they fall short of Frost’s benchmark that for businesses in Great Britain, trading with Belfast should be as easy as commerce with Birmingham.

Britain proposed a “full dual regulatory regime” for Northern Ireland that would allow goods compliant with EU and UK standards to circulate freely in the marketplace side-by-side.

The EU has ignored this request. EU officials said that under the Northern Ireland protocol the region is inside the bloc’s single market for goods and therefore must comply with its standards.

The FT has revamped Trade Secrets, its must-read daily briefing on the changing face of international trade and globalisation.

Sign up here to understand which countries, companies and technologies are shaping the new global economy.

But the EU has agreed that all medicines registered in the UK will be able to circulate freely in Northern Ireland, which is heavily reliant on suppliers in Great Britain, after concerns companies would pull products rather than bear the costs of the bloc’s regulations. This move will require amending EU law.

The commission has declined to address another emotive issue: pets. While guide dogs will be exempt, Britons taking their pets from, say, Liverpool to Belfast will need a pet passport and vaccination certificates as they do when travelling into the EU, although such checks are currently not being enforced.

3. Oversight of the Brexit deal

The UK wants an end to the European Court of Justice’s role in oversight of the Northern Ireland protocol, saying it is intolerable to have part of its territory under the jurisdiction of a foreign court.

Instead Britain proposes an arbitration system of the kind it negotiated in the UK-EU Trade and Cooperation Agreement, which does not have the ECJ as the final arbiter of disputes.

The commission has refused to engage, saying that since the protocol leaves Northern Ireland following EU rules for goods it must, axiomatically, accept the writ of the ECJ.

The EU has, however, suggested setting up a mechanism to facilitate deeper consultation with Northern Ireland’s political and business representatives, perhaps with an eye on 2024, when the region’s devolved assembly will vote on whether to retain the protocol.

But the EU will only agree on such a mechanism in full consultation with the British government.

The EU has also ignored London’s demand for a rewrite of Article 10 of the protocol, which requires any UK government subsidy decision that potentially affects goods trade in Northern Ireland to comply with the bloc’s rules on state aid.

Brexiters argue that Article 10 gives the commission an unacceptable ability to interfere in UK decisions that only indirectly touch Northern Ireland.

The UK and EU will now engage in intensive talks in order to see if a compromise on Northern Ireland’s trading arrangements can be agreed.

While both sides said they were not setting red lines, the gulf on some issues, including the role of the ECJ, remains vast.

Failure to reach an accommodation could lead the UK to carry out its threat to unilaterally suspend parts of the Northern Ireland protocol under Article 16.

This could ultimately trigger a trade war, in which the EU imposes tariffs on UK industries including carmaking and fishing.

Keep up to date with the latest developments, post-Brexit, with original weekly insights from our public policy editor Peter Foster and senior FT writers. Sign up here.

You Were Made For This Moment (with Max Lucado)