Analysis-U.S. financial conditions have eased. So far the Fed is okay with it By Reuters 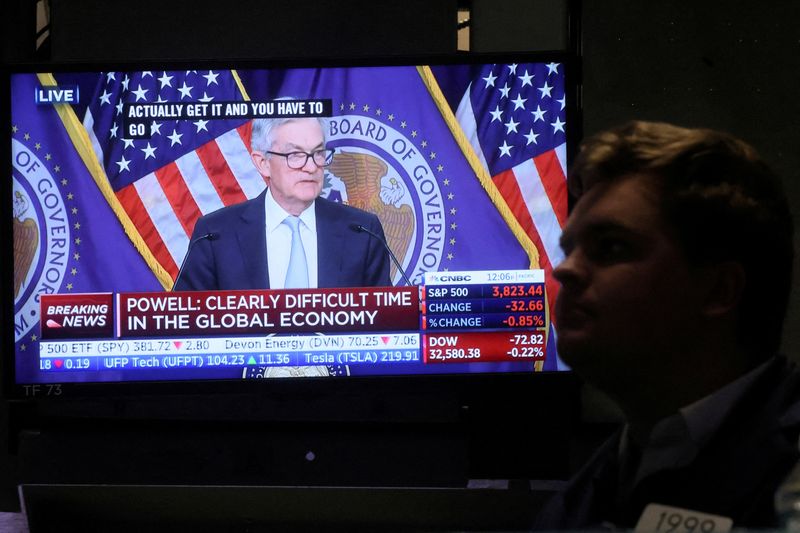 (Reuters) – Over the past six weeks or so, U.S. mortgage rates have fallen, stock prices are up, and yields on corporate debt have dropped, all signs that financial conditions are easing even as the Federal Reserve continues to wage war on 40-year-high inflation.

But unlike this past summer, when Fed Chair Jerome Powell pushed back hard in the face of a similar set of market moves, U.S. central bankers may this time be mostly okay with it.

The Fed next week is expected to slow what’s been a blistering pace of interest rate increases this year, with Powell telegraphing a half-of-a-percentage point increase in the policy rate, to a range of 4.25%-4.5%.

The Fed raised rates by 75 basis points at each of its last four meetings as it sought to lift borrowing costs high enough to bite into economic growth.

Anticipation that December’s smaller rate hike means the Fed is closer to ending rate hikes altogether, along with data showing inflation may be cooling and remarks from Powell that he and his colleagues “do not want to overtighten,” has fueled the recent easing in financial conditions.

That’s despite Powell and other policymakers repeatedly saying they are not done raising rates, and won’t be until they are convinced that inflation, now running at 6% by the Fed’s preferred gauge, is headed down to the Fed’s 2% goal.

Still, BNY Mellon (NYSE:) Investment Management economist Sonia Meskin said, “they don’t appear to me as concerned about the loosening of financial conditions” as they were in the summer, when rate hikes had only just begun.

“I would expect him to reiterate that they’re going to keep policy restrictive for some time, but I don’t think he is likely to say anything beyond that, and the reason is, they actually want to keep their options open,” she said.

The Fed will likely need to raise the policy rate “somewhat higher” than the 4.6% policymakers projected in September, Powell said late last month.

Fresh projections by Fed policymakers released after next week’s meeting are expected to reflect that, along with a forecast for no cuts to the policy rate until 2024.

But inflation data or readings on the labor market could come in lower than expected, allowing the Fed to lean into the easing in financial conditions and stopping rate hikes at a lower point than otherwise.

Or things could get worse, perhaps because labor supply constraints continue to feed higher wages and push up on inflation, a possibility Powell nodded to in recent remarks and could reprise next week.

There is also uncertainty over how tight policy actually is. Researchers at the San Francisco Fed recently tried to capture the effect of the Fed’s forward guidance and reductions to its balance sheet, and concluded that monetary policy is actually tighter now than the Fed funds rate suggests.

That could feed into arguments that the economy and labor markets are poised to weaken next year, easing inflation pressures.

Some economists do expect Powell to continue to emphasize the risks of not doing enough to fight inflation rather than about going too far, with a rise in unemployment a painful but necessary part of the process.

“The Fed wants financial market conditions to be tighter,” said Oxford Economics’ Ryan Sweet, because that is how the Fed slows the economy and brings down inflation, a process that will likely also include an increase in unemployment. “They are getting a little frustrated.”

The average 30-year fixed rate loan for residential housing, which rose to more than 7% in October from about 3% a year earlier, dropped to about 6.3% in the most recent week. Yields on the riskiest corporate debt have fallen to about 8.6% from about 9.6% in mid-October. And those drops came despite the Fed lifting its policy rate by three-quarters-of-a-percentage point, to 3.75%-4% in early November.

Meanwhile, unemployment has stayed at a low 3.7%, below where Fed policymakers had thought it would be as tighter policy slowed the economy.

Part of the reason the Fed may be more comfortable with easing financial conditions now than in the summer is simply that the Fed has already raised interest rates by nearly 4 percentage points.

It expects the effects of those higher borrowing costs on the economy as a whole to take a while yet to kick in.

“As much as they would love to not have a premature easing of financial conditions, the cost of that back then was a lot higher then than it is now,” said Morgan Stanley (NYSE:) Investment Management’s Eric Stein. “They are a lot closer to where they need to go.”