“This week, we approach the one-year anniversary of the Fed announcing its intent to move from an accommodative to more restrictive policy, which occurred on Nov. 30, 2021, which is known as the date of its latest pivot.   The SPX closed at 4,655 the day prior to this announcement. Since then, beginning in March, six rate hikes have occurred, and we are going into this week almost 14% below the index’s close one year ago…”

“My colleagues and I do not want to overtighten because…cutting rates is not something we want to do soon…. That’s why we’re slowing down and going to try to find our way to what that right level is.”

We’ve passed the one year mark from when the Federal Reserve cautioned investors about its forthcoming intentions to pivot from an accommodative policy to a more restrictive one, in an effort to fight inflation that had stayed around longer than expected. Nov. 30 of last week marked a potentially pivotal stage for the market, just as November 30, 2021 did. It was several weeks after the Fed’s pivot in late-November 2021 that the S&P 500 Index (SPX – 4,071.70) put in its all-time high that then preceded bear market action this year.

Fast forward to November 30, 2022 and Fed Chair Powell did not indicate a pivot back to a more accommodative policy but did indicate a potential shift in the magnitude of future rate hikes. Apparently, the hint that the Fed is about to engage in smaller magnitude rate hikes relative to the 75-basis point hikes investors quickly got accustomed to the past few months, is all that investors needed to hear. This is due to the SPX rallying 3.1% from the previous day’s close of 3,958 — its second largest daily gain in 2022.

The 3,958 level on the SPX is one to watch in the days and weeks ahead, as investors anchor to the close prior to Powell’s most recent comments. It may have importance like the 4,655 level late last year and earlier this year, which was its close prior to the Fed cautioning investors about its intent to move toward a more hawkish policy. In retrospect, the 4,655-level marked support after a short-term pullback in December 2021 and was a resistance area in February and March 2022.

Prior to Powell’s comments, the SPX pulled back in the first two days of last week. Note that the first level of support that I identified last week in the 3,950-area held. Not only was this the mid-September breakdown level when the SPX crossed below a trendline connecting higher lows from June through early-September, but it was also the site of the trendline connecting higher lows since October that I discussed last week.

Speaking of the 200-day moving average, Wednesday’s Powell-driven rally pushed the SPX above this trendline, which has had bullish implications in the past, after spending a long period below this popular moving average. 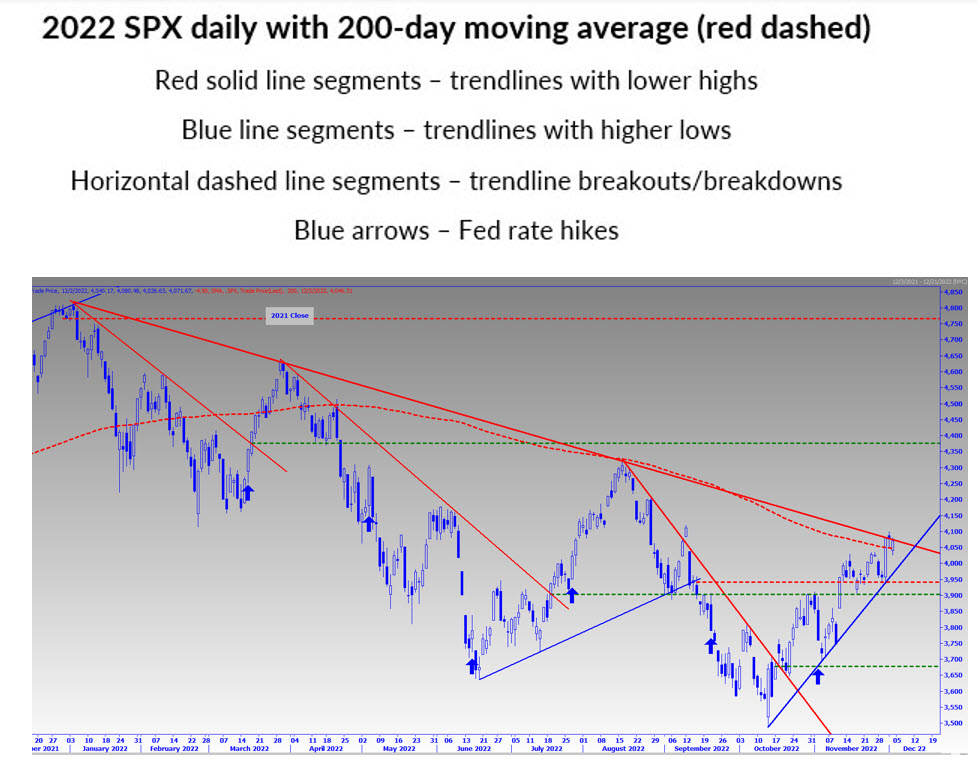 For those looking for a strong year-end rally, and assuming a move above the aforementioned trendline resistance, the next level of resistance would be around 4,290-4,300. The 4,290 level is coincident with a round 10% below the 2021 close, which has marked support and resistance a few times in 2022. Additionally, 4,290 is the SPX’s open price on the day it peaked in mid-August.

The bears are likely feeling the most pain that they have felt in months. This is important, as recent price action may help reduce or even eliminate a headwind that has been in place much of the year; a build in short interest. For example, SPX component short interest is up 16% this year. While not an extreme looking back several years, it is only about 10% lower than the level that preceded the Covid-19 driven lows in early 2020. 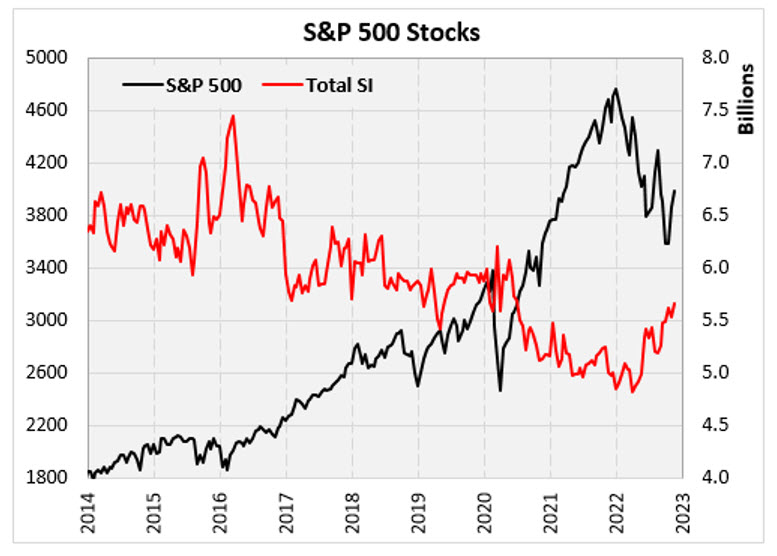 “One bad year in the stock market has turned Wall Street strategists into bears after two decades of bullishness. The average forecast of handicappers tracked by Bloomberg calls for a decline in the S&P 500 next year, the first time the aggregate prediction has been negative since at least 1999… In almost a century of historic data, two straight years of losses or more only occurred on four separate occasions, with the latest episode coming during the bursting of the dot-com bubble… At 4,009, the average projection for the S&P 500 calls for a decline of more than 1% by the end of 2023 from Thursday’s close.”

I found the above excerpt from an article in Bloomberg interesting, especially in the context of the discussion above.

For example, just as the Fed’s pivot to a more hawkish policy forced many bullish market participants out of the stock market or caused a plethora to reduce stock exposure in 2022, could a simple slow-down in the magnitude of rate hikes bring a more positive tone to the market this month and into 2023?

If so, this would come just after many market strategists have soured on the market, even with the historical odds of two consecutive years of declines stacked against them. Even further, the SPX is trading above its 200-day moving average for the first time since early April and took out multiple layers of potential resistance in weeks prior. Given the size of the SPX’s selloff during most of the year, there will always be other technical resistance levels to overcome, the biggest of which is the trendline connecting the January high with the March and August peaks.

There are never guarantees, but with short interest at higher levels now relative to months ago, the Fed giving an indication that its next moves will be moderate relative to the past, and the improvement in the technical backdrops in recent weeks, the outlook is looking more positive for bulls.

Risks moving forward are growing perceptions that a 5.00-5.50 Fed Funds rate is an increasing likelihood again. Last week, Fed Funds futures traders moved the probability of the rate being in this zone from 50% the week prior to Friday’s 39% probability, which helped give a positive undertone to equities. Also keep an eye out for more inflation data due out in the coming days, beginning with Friday’s Producer Price Index (PPI) readings and the November Consumer Price Index (CPI) report early next week. Both of those can sway these probabilities significantly.

Todd Salamone is the Senior V.P. of Research at Schaeffer’s Investment Research.

An Unstoppable Stock Market Is About to Meet the Immovable Fed