We are officially headed into the second year of the bear market. Businesses around the world are feeling the pinch as consumers and trade partners tighten their budgets heading into 2023. A recession is possible, and inflation is still a persistent worry among many.

Eventually this bear market will end, and the best businesses that managed the economic downturn will shoot higher. Three such companies with stocks that have fallen by at least 50% are The Trade Desk (TTD -1.44%), Roku (ROKU 1.63%), and Sea (SE -0.70%). Here’s why three Fool.com contributors think they are buys before the next bull market starts.

A top play in digital ads, in good times and bad

Nicholas Rossolillo (The Trade Desk): The digital ad industry is in disarray at the end of 2022, but The Trade Desk is doing just fine. Sluggish economic activity is blunting marketing budgets. Additionally, Apple‘s privacy changes — users can now opt out of app activity tracking, which advertisers use to target the right audience for their promotions — are also hurting the digital ad space. While many software companies that help with the flow of ads have experienced a sharp decline in revenue, The Trade Desk is humming along nicely.

Specifically, third-quarter 2022 revenue soared 31% higher to $395 million. And the outlook for the fourth quarter implies growth of at least 24%, to $490 million or more.

Growth amid a tough economy is all fine and well, but what makes The Trade Desk “incredible?” As a demand-side ad platform (it connects marketers with publishers listing ad time for sale), the company has significant competition in the form of Alphabet‘s Google, Meta Platforms‘ Facebook, Amazon, big internet service providers, and more.

And yet The Trade Desk has differentiated itself with an excellent software stack that makes it more of a partner to marketers — as opposed to a service provider and competitor like the aforementioned names. Other big tech companies have conflicts of interest that might work against their advertising agent customers, but that’s not the case at The Trade Desk.

Plus, The Trade Desk generates lots of profits, and it’s early on in beginning to return those profits to shareholders. Net income per share was just $0.03 last quarter (down from last year due to stock-based compensation to employees). But on a per-share basis (which accounts for dilution from stock-based comp), free cash flow is soaring. 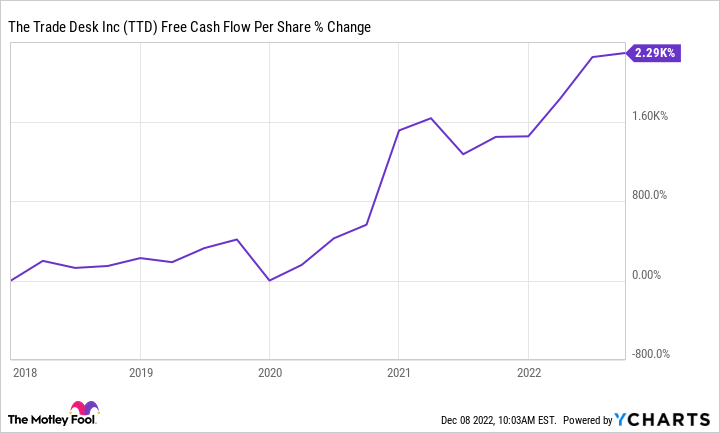 After getting clobbered by the market this year, The Trade Desk is valued at just under 50 times trailing 12-month free cash flow. It’s a high price tag, but one I’m happy to pay up for given this company’s superior returns in the digital ad industry. When this bear market ends, this business could be in for a massive run-up.

Let me repeat: Roku is a screaming buy right now

Anders Bylund (Roku): I’m sure you have heard this before. However, it’s still true. Therefore, I’m saying it again.

As of this writing, Roku’s shares are down by 80% in 52 weeks and 50% in the last six months. The stock trades at eminently reasonable valuation ratios, such as 2.3 times trailing sales and 2.6 times the company’s book value.

And Roku faces tremendous growth prospects in a thriving market. People all around the world are dropping their cable, satellite, and broadcast TV habits in favor of digital streaming options. Roku offers an incredibly user-friendly platform for streaming video content, with a market-leading footprint in North America and ambitious long-term plans for international growth.

Business is actually booming. Roku’s third-quarter report showed a 16% year-over-year increase in the number of active users. Each customer also made use of their Roku-powered devices more often, resulting in a 21% uptick in streaming hours and 10% higher average revenues per user (ARPU).

Keep in mind that most analysts and many investors saw this report as a big disappointment. Share prices fell as much as 18% the next day. But Roku’s greatest mistake was to set modest guidance targets for the next quarter. The reported third-quarter figures exceeded Wall Street’s expectations across the board, with adjusted losses 31% below the consensus estimate on a 10% revenue surprise.

Roku keeps doing almost everything right, setting the stage for a massive upswing when the global economy gets back on its feet. Meanwhile, clear-eyed growth investors are taking advantage of this wide-open buying window. For example, Cathie Wood’s ARK Innovation ETF (ARKK -1.45%) picked up 167,000 more Roku shares after the third-quarter report.

That’s a smart move, as long as you agree that digital streaming is the future of the media industry. I highly recommend following Wood’s example while Roku’s stock is hanging out in Wall Street’s bargain bin.

A leader in high-growth markets on the horizon of profitability

Billy Duberstein (Sea Limited):  Southeast Asia’s Sea Limited catapulted higher during the pandemic, as its three main businesses in gaming, e-commerce, and digital financial services were tailor-made for the pandemic era. During that time, Sea Limited posted eye-popping triple-digit growth rates — but also losses on its bottom line that were just as eye-opening, as it invested heavily in market leadership.

As we all know, the winds shifted in 2022. Rising interest rates hurt unprofitable growth stocks’ valuations, and Sea’s business growth slowed as customers returned to out-of-home pursuits. Moreover, the dollar strengthened, hurting the value of revenues and profits earned overseas.

After that perfect storm, no wonder Sea Limited’s stock declined 74% this year. In fact, Sea Limited was actually down much more at one point, but recently rose nearly 50% off its lows following its recent earnings report.

The recent bounce came as investors saw management executing on promises made earlier in the year. In early 2022, Sea’s management pivoted its mentality to focus on getting to profitability as quickly as possible. With its profitable gaming segment stalling out and beginning to decline, as the hit game Free Fire matured, that meant bringing its unprofitable e-commerce and fintech segments from losses to breakeven.

Nowhere is that more important than in its Shopee e-commerce platform, now Sea’s largest segment. At the beginning of the year, management laid out the goal of getting Shopee’s core Southeast Asian markets to breakeven on an EBITDA basis (earnings before interest, taxes, depreciation, and amortization), before the allocation of headquarters costs, by the end of this year. Management achieved that a quarter early in Q3, with Taiwan and Malaysia posting positive EBITDA even with the inclusion of allocated headquarters costs.

Shopee still posted pretty respectable revenue growth as well — 32.4%, or 38.8% in constant currency, That’s impressive, especially considering Shopee was lapping a quarter in which it grew 134.4% at the end of the pandemic.

Meanwhile, Sea’s other unprofitable division, its SeaMoney digital financial services segment, continued its torrid growth. It rose 147.2% to $326.9 million, with its EBITDA loss narrowing by 57.4% over the past year to just $67.7 million.

With management backing up its promises from earlier this year, that bodes well for its next goal stated on the recent conference call. That’s for Shopee and SeaMoney to reach EBITDA breakeven overall, including all allocated headquarters costs as well as the high-growth Brazilian market, by the end of 2023.

With $7.3 billion in cash, Shopee should have plenty of cushion to get there. Once the company gets to a point where overall profitability becomes more visible, this market-leading growth stock should take off again.

Green and Renewable Energy: Not So Fast?